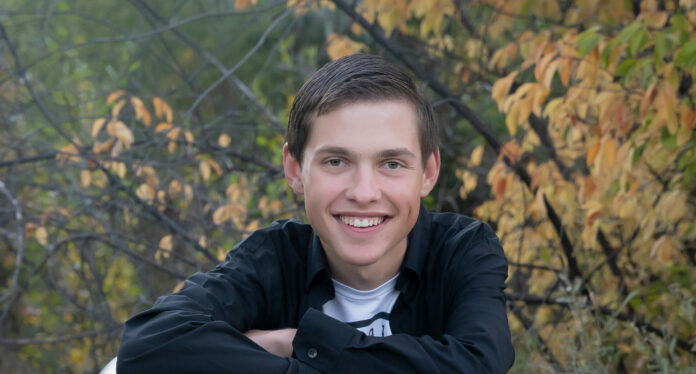 Ethan Forbis was nominated as student of the week by Mr. Lloyd Meredith and Mr. Andy Peeks.

Mr. Lloyd Meredith: “He is a student that puts his own preparedness for the next level to the foremost degree.  He is always on task and asks questions along the way.  He is a great help to the students around him and expects no less than the best from himself.”

Mr. Andy Peeks: “Ethan is an integral part of the RHS band program.  His dedication and commitment to our band are second only to his musicianship and the example he sets for the other students in the band.  He’s consistently an outstanding student in our band.”

Ethan is President of National Honor Society and Vice President of Changing Attitudes Now (CAN). He has enjoyed being a weekly Peer Mentor to Rendezvous Elementary students for being drug and alcohol free. Ethan has participated in marching band, pep band, and concert band all four years and jazz band for two years. He is a Co-Section leader for the trumpets. Ethan has been involved in Student Council holding different positions throughout his four years. He competed with the Riverton High School golf team for three years. Ethan was a member of the Future Business Leaders of America (FBLA) for two years.

Ethan has been a member of the Fremont Community Band for three years. In the summer, he and two friends keep busy with their lawn service company. Ethan enjoys collecting and watching movies of all genres, riding his dirt bike, drawing, spending time with his family, and playing his guitar with his friends in their band, Incendium.

Ethan plans to graduate with his Associate’s degree in Science from Central Wyoming College in May. Ethan placed in the top ten for the Central Wyoming division of the Wyoming State Mathematics Competition last year. He performed in the top ten for all his state FBLA events for two years and he was able to attend the National FBLA Convention in Chicago last summer. Ethan received the top Freshman English student award. He has lettered in academics, band, and golf.

After graduation, Ethan plans on studying Microbiology and Pre Med and then going on to Medical School. He is undecided as to where he will attend.

Ethan Forbis is the son of Chris and Tiffany Forbis.