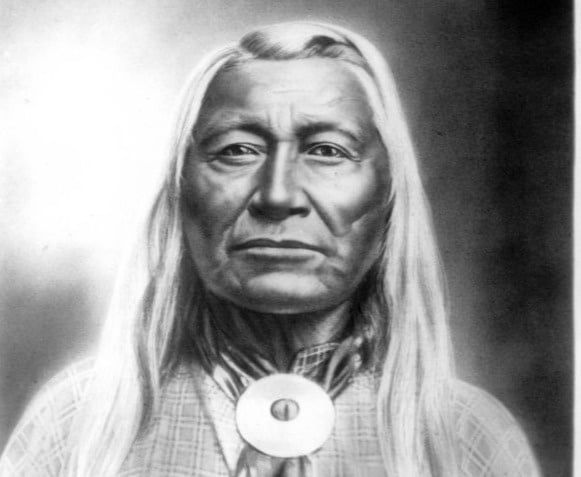 The Fort Bridger Treaty of 1868 was signed by leaders of the Bannock and Eastern Shoshone bands as well as by representatives of the U.S. government. Among other things, it resulted in the creation of the Wind River Reservation. Under the 1868 treaty, the newly formed reservation was less than one-tenth of the area which had been set aside for Chief Washakie’s tribe of Shoshone five years earlier in 1863. The new treaty also called for the creation of a military post within the boundaries of the new reservation to help prevent and deter raids from “unfriendly” tribes. That military post eventually became known as Fort Washakie.

Camp C.C. Augur was established in the Popo Agie River valley in 1869 by First Lieutenant Patrick Breslin. However, Camp C.C. Augur was designated a sub-post of Fort Bridger and, as a result, was never officially a military fort. It was also short-lived. Reorganization on the Wind River Reservation resulted in Camp C.C. Augur being renamed Camp Brown on March 28, 1870. One year later, the decision was made to move Camp Brown northwest, to the junction of the North and South Fork of the Little Wind River. The new location would be more conducive to a greater military occupation. On July 26, 1871, the new site of Camp Brown became official and its former site was dismantled. Serviceable lumber and other reusable items were transported to the Camp’s new location. By 1873 the garrison of Camp Brown was comfortably established, and more substantial stone buildings began to replace the earlier structures.

For the next few years, many Shoshone Indians enlisted with the U.S. Army at Camp Brown to serve as scouts. They participated in many engagements against the Sioux, Cheyenne, and Arapaho. Under the leadership of Chief Washakie, they fought at Bates Battlefield in the Bighorn Mountains in 1874 in what “might be considered one of Camp Brown’s greatest days”. Subsequent engagements occurred throughout 1876 and 1877 where the US Army and the Shoshone fought side-by-side. By late 1877, one of the traditional enemies of the Shoshone, the Arapaho, were moved to the Wind River Reservation. Their temporary placement was reluctantly agreed to, but the relocation soon became permanent. Chief Washakie continued in his role as the leader of the Shoshone people and he commanded respect from those who encountered him.

On December 30, 1878, a government order designated Fort Brown to be renamed Fort Washakie to honor the highly respected Shoshone leader. The role of the fort began to change as the turn of the century approached and in 1899, the military proposed abandoning Fort Washakie as it was no longer needed to prevent raids and skirmishes to the Reservation or the outlying communities. Chief Washakie intervened and prevented the Fort from closing and becoming the property of the Department of the Interior. Upon his death, in February of 1900, the U.S. military gave Chief Washakie full honors and erected a granite marker at his grave. His legacy lives on, in part, in the town which still bears his name.

How You Can Help?