Bear cub found in Lander Saturday was in poor condition

The young black bear cub retrieved from a tree in Lander on October 17th had to be euthanized, according to an update from Wyoming Game and Fish Lander Region Information and Education Specialist Rene Schell. “It is a sad day when our jobs require us to make these difficult but ethical decisions.”

The cub was in very poor condition and would not have survived through the winter on its own. It was not a candidate to rehabilitate or try to rehome to a zoo due to its age and condition.

“The black bear cub’s condition indicated that the mother bear has not cared for him for some time,” Schell explained. “He was severely emaciated and very small for his age. The cub was reported alone near Lander the day prior but we were unable to locate him on Friday. He was born just this year, did not have the ability to forage on his own, would have needed to den with his mother this winter, and wouldn’t have been weaned from her for about 8 more months.”

The cub was spotted in a tree near Safeway and Atlantic City Federal Credit Union on Saturday. It was a three-agency effort to safely retrieve the cub from the tree.

“In addition, the Lander Volunteer Fire Department and the Lander Police Department were invaluable in their assistance,” Schell continued. “They allowed our staff use of their bucket on one of their firetrucks which ensured the safety of the public, our staff, and the bear. We were able to get closer to the cub and get a safer shot with our dart gun and did not require our staff to climb far up into the tree.” 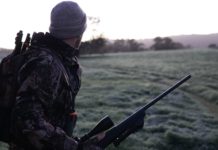 #WyoStrong: Over 3,200 meals provided by Hunters for the Hungry in... 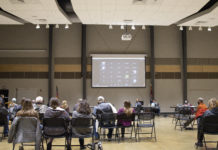