Warriors give Riverton a heartbreak play in game 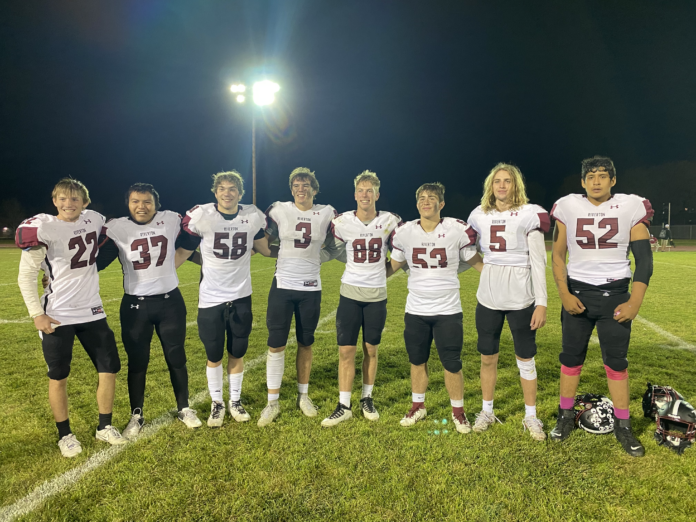 (Worland, WY) – It was one of the easiest playoff scenarios in the state of Wyoming. A win and you are in. Riverton traveled to Worland for a play in game into the post season, but fell short 42-21.

Riverton scored the only touchdown in the first with a two yard touchdown run from Darrick Devries to put the Wolverines up 7-0 heading into quarter two. Worland answered with a three yard passing touchdown from Kade Weber to Carter Clark. Riverton held the scoring advantage after the point was no good. Devries would extend the Riverton lead by running in from six yards out. It was set up by a great kickoff return by Nathan Hutchison. The Wolverines lead 14-6 after the first half.

The second saw the hopes of Wolverines fans drift away, with Riverton fumbling at their own 19, the Warriors worked with the short field and scored on a 8 yard touchdown pass from Weber to Clark for the second time of the day. Worland missed their point after a second time, keeping the score in favor of Riverton. However, the Wolverines would turn it over again on an interception that ended with a Weber fourth and goal touchdown run from the one yard line to cut to give Worland their first lead of the game 20-14. The Warriors scored one final time in the third, taking only two places and a 37 yard touch pass from Kade Weber to Trae Bennet. Worland converted on the two point attempt leading 28-14 heading into the final 12 minutes.

Riverton would cut the lead on the first score in the fourth quarter after taking 10 plays and 73 yards. Devries throw to DevRin Monroe from a 20 yard score giving Worland only a seven point advantage. Worland would put the main on the final nail on the coffin for the Wolverines season having a 7 yard touchdown run by Brock Douzeins, and a defense 58 yard scoop and score to end the game with a final of 42-21.

Worland advances to the playoffs locking in the number four seed out of the 3A East and will head up to Cody in the first round. The Wolverines finish the year 1-8 overall and 1-4 in conference play.

You can catch the full game here.