Similar to recent years, annual fall gill netting by the Wyoming Game and Fish Department showed that Boysen Reservoir continues to provide an excellent fishery in 2020. Walleye numbers were the highest observed since 2014 (Figure 1). Strong 2014, 2015, 2016 hatches and an especially strong 2018 hatch are providing anglers excellent opportunities to catch 12 to 20-inch walleyes (Figure 2). Twelve to 14-inch walleyes from the 2018 hatch made up the majority of fish captured in Game and Fish gill nets in 2020.

The 2020 sauger catch rate was also good and was the highest observed since 2002 (Figure 3). The higher catch rates observed from 2018 – 2020 indicate the population is still continuing to recover from the early 2000s crash that was caused by extended drought. The majority of saugers captured in 2020 were 13 to 16 inches and likely age-2 and age-3 (Figure 4).

According to Fisheries Biologist Paul Gerrity “Ice anglers this winter can expect good numbers of walleye and sauger; however, catching yellow perch will be a bit more difficult. And, although walleye exist in higher numbers, many ice anglers have had more success catching sauger in recent years. This winter as always, it will be important for anglers to be able to identify saugers from their close relative walleyes because of differences in creel limits.”

The creel limit on saugers in the Wind River drainage (including Boysen Reservoir) is two, whereas six walleyes can be harvested daily or kept in possession. Sauger and walleye limits in the Wind River drainage are not combined, so an angler can possess up to eight fish as long as no more than two are sauger and no more than six are walleye. All walleye and sauger caught in the Wind River drainage also must remain whole (gills and entrails may be removed) until the angler is off the water/ice and done fishing for the day. Once off the water/ice and done fishing for the day, walleyes and saugers may be filleted for transportation and storage. A piece of skin large enough to allow species identification (at least one (1) inch square) shall remain on all fish fillets while in transit or in the field. Please see the photo at the top for the difference between sauger and walleye. 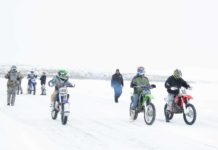