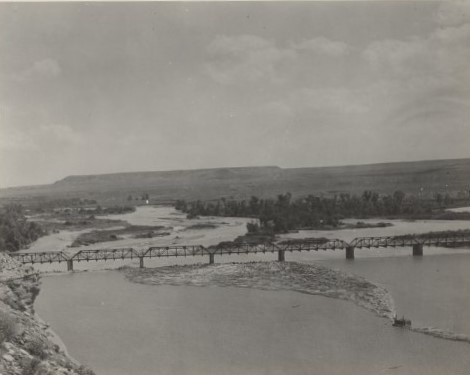 Located on County Road 24 in Fremont County, the Diversion Dam Bridge carries traffic between Riverton and Dubois across the Wind River. It was built by the Taggert Construction Company of Cody between 1924-1925 at a cost of approximately $58,000. The Wind River Diversion Dam Bridge (ELS) is, unbeknownst to many, one of the most significant bridges in the state of Wyoming.

When the Wyoming Highway Department was first created in 1917 it was designed to improve the dismal road and bridge conditions across the state. As a result, one of their first acts was to standardize bridge plans and specifications. In doing so the highway department hoped to shift bridge design away from national firms to in-state firms, save money by being able to present specific plans from the start to construction firms and builders, and, most importantly, make bridges much safer. Prior to standardization, highway bridges failed more often than railroad bridges as cost-conscientious local officials contracted with “fly-by-night” construction firms notorious for quick constructions with little to no technical knowledge.

As plans were standardized, truss-building in Wyoming reached its peak. Truss bridges are effective because they use materials economically, can carry heavy loads, and can span wide crossings. Several different variations of truss bridges exist, but in general, a truss bridge is one in which the load-bearing superstructure is composed of a truss (a rigid structure composed of interconnected beams) which forms smaller triangular units. When the Wyoming Highway Department put out an RFP for a bridge to be built alongside the Diversion Dam, the winning company, Taggert Construction Company, chose the popular truss bridge. Since the aggregate length of the bridge needed to be 720-feet they designed a special, more expensive bridge which was funded in part from Federal Aid Project 159A.

When it was completed, the bridge was comprised of eight individual 80-foot steel truss spans. The truss spans were integrated into the main structure of the dam and the result was the first vehicular bridge of this type ever constructed in the entire country. In addition, the eight trusses which comprise the bridge make it the longest highway truss bridge as well as the bridge with the greatest number of individual truss spans in the state of Wyoming. In its fourth biennial report, the Wyoming Highway Department described the bridge as, “a splendid structure offering a much needed permanent crossing of the Wind River between Riverton and Dubois”. The Wind River Diversion Dam Bridge was added to the National Register of Historic Places in 1985 as one of the most significant examples of bridge engineering in the state.

Two other bridges in Fremont County which are also listed on the National Register of Historic Places are the Bridge over the Wind River (BMU) and the Bridge over the Big Wind River (ELS). The BMU bridge is located near Ethete. It was constructed in the early- to mid-1930s but was disassembled and moved to its current location in July 1953 by Charles M. Smith of Thermopolis. It remains the longest single-span highway truss bridge still in use in Wyoming. The ELS bridge is located on County Road 21 in Dubois and was originally built in the 1920s. It has been described as a “jury-rigged structure” constructed with salvaged materials from other bridges and represents an interesting and unique departure from the standardized bridge forms developed for small vehicular trusses.

May 22nd,1-3 pm at the Pioneer Museum “Historic Plant Day”