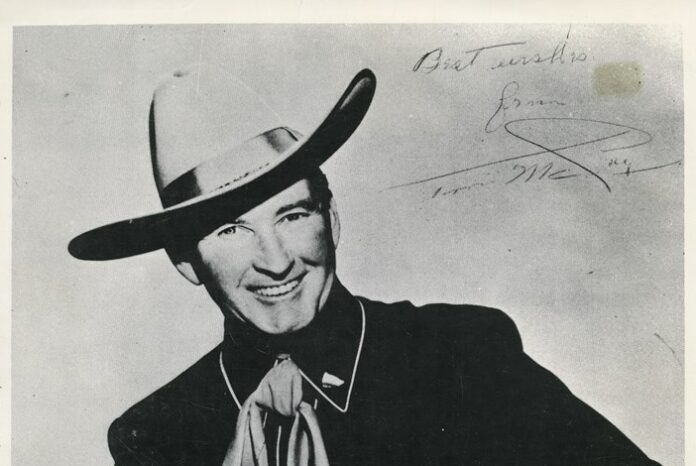 Tim McCoy was born in Saginaw, Michigan in 1891. While in college studying for the
priesthood, McCoy attended a Wild West show and became enamored by western
culture. He purchased a one-way train ticket west and ended up in Lander, Wyoming in
1909 where he found work as a ranch hand at the Double Diamond Ranch near Dubois.
He became an expert rider, and roper. He also made deep friendships with the
Arapaho and learned Indian Sign Language. Arapaho gave him the name High Eagle.
When W.W.I started, he joined the Army and served in the cavalry. He attained the
rank of Colonel in the Army Air Force, and between the wars he attained the rank of
Brigadier General at age 28 while serving in the reserve.

After the war, McCoy bought a dude ranch in the Owl Creek mountains. In 1923, Jesse
Laskey asked McCoy to provide extras for a Western silent movie called The Covered
Wagon. It was filmed in Utah. Unfortunately, there are no surviving copies of Covered
Wagon. To promote the movie McCoy brought a troupe of Native Americans to perform
a Wild West show preceding showings of the movie. His troupe went on to perform in
London and Paris.

McCoy returned to his ranch in Wyoming, but soon he was under contract with MGM
studios to star in Western movies. His first MGM feature was War Paint (1926) which
was filmed on the Wind River Reservation with local Native American extras. Footage
from War Paint was spliced into many low budget westerns as late as 1950. In a McCoy
movie, Native Americans were never portrayed as bloodthirsty savages, but as
sympathetic, compassionate characters.

In 1936, McCoy left Hollywood to work with Ringling Brothers Circus in a Wild West
Show. The venture lost a great deal of money and went bankrupt. When the show
closed in Washington DC performers were given $5 and left to find their own ways
home. The Bureau of Indian Affairs paid to return the Native American performers to
their respective reservations. McCoy returned to Hollywood and made films until the
start of W.W. II.

In 1942, McCoy ran for the Senate from Wyoming. After he lost in the primary, he
immediately volunteered for the Army and was decorated for his service. After McCoy
retired from the Army, he sold his Owl Creek Ranch and never returned to Wyoming.

In 1945, McCoy married Inga Marie Arvad, a Danish journalist. She was suspected of
being a Nazi spy. She had been Adolph Hitler’s guest at the 1936 Olympics in Berlin and attended the wedding of Hermann Goring. She insisted she did not share Hitler’s
political views. During W.W. II, she was romantically linked to John F. Kennedy.

In the 1950s, McCoy hosted a children’s TV show in Los Angeles where he told
authentic western stories and showcased his movies. He won a local Emmy for the Tim
McCoy Show.

McCoy was honored with a star on the Hollywood Walk of Fame in 1973, and he was
inducted into the Cowboy Hall of Fame in 1974. In 1977, McCoy wrote an
autobiography, Tim McCoy Remembers the West: An Autobiography. McCoy died in
1979 and is buried in Saginaw, Michigan.

The Wind River Cultural Centers Foundation has been created to specifically benefit
The Dubois Museum, the Pioneer Museum in Lander and the Riverton Museum.  The
WRCCF will help deliver the long term financial support our museums need to flourish.
In the current economic environment, the museums are more reliant than ever on
donations from the private sector to continue to provide the quality programs, collections
management, exhibits and services that have become their hallmark over the last four
years.  Please make your tax deductible contribution to be used specifically for the
benefit of the museum of your choosing by sending a check to Wind River Cultural
Centers Foundation at PO Box 1863 Lander, WY 82520 or taking it directly to the
museum you choose to support.
Photo : Tim McCoy