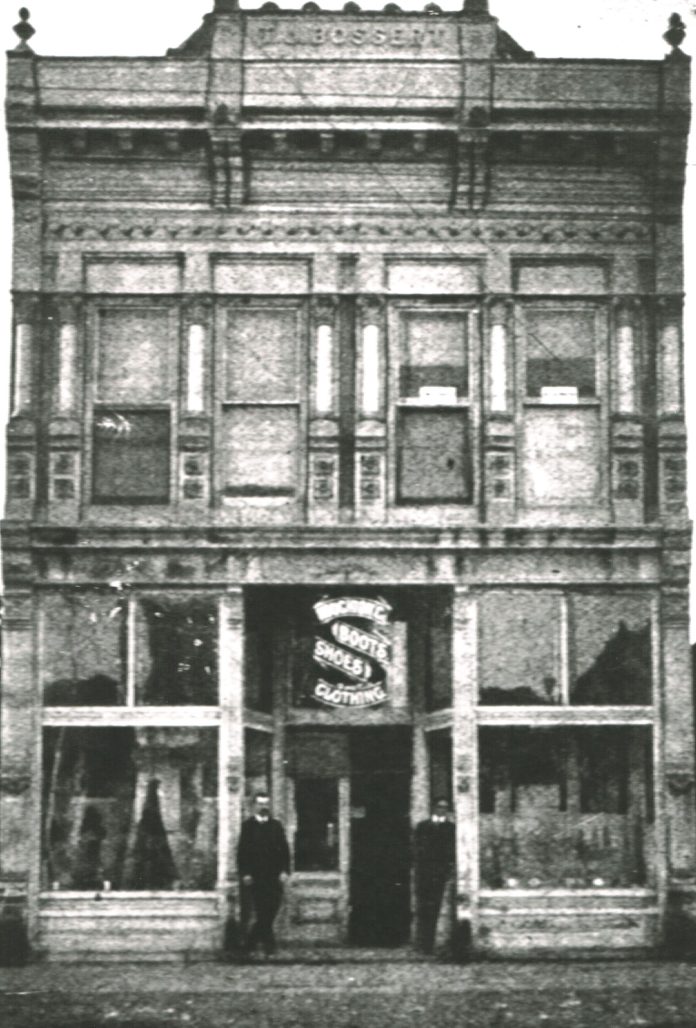 The Bossert Building sits in the 200 block of Main Street in Lander, Wyoming.  It was a pretentious two story building with Corinthian columns and a metal gingerbread facade when it was first built in a town of log cabins and adobe buildings.

It sits on land that was part of the original Lander township site.  After the Brunot agreement was signed in 1872 with the Shoshone, which removed the land south of the North Fork River from the reservation, Benjamin Franklin Lowe filed a claim on 160 acres of land along the Green River to Fort Washakie freight road close to the abandoned Camp Auger/Brown. Lowe later deeded a third of the claim to Peter Paul Dickenson, from Camp Stambaugh and a third of the claim to Eugene Amoretti, from South Pass City.  This was the start of the Lander Townsite Company.

In 1883, The Township Company deeded two town lots on Main Street to Louis Poire, a Frenchman with mining interests at South Pass.   Poire built a two story home/business on part of the land.  Poire died unexpectedly 17 years later in 1900 on a trip to California, but before he died Kate and Thomas Bossert built the structure that stands today on half of each of the two lots. The Bosserts came from Iowa to Lander in May of 1891 intending to open a boot and shoe store.  The Bosserts opened a dry goods store in the building and started accepting only cash instead of putting purchases on credit, which had been the accepted business practice at the time. They advertised that they were the BIG CASH STORE. The Bosserts advertised frequently in the Lander Clipper, the newspaper of the day.  They would buy half page ads in almost every issue. The Bosserts left Lander about the time the railroad came to town in 1906.  They had been very successful businessmen.

After Poire’s death there was a protracted court case before his estate was finally settled. It took 4 years to settle the estate.

In 1907, James McKenna bought Poire’s Main Street property and in 1910 the building was leased to O.L. Middlekauff who ran a furniture business and an undertaker parlor.

Evidently, in 1920 the ownership of the property was again in question. H. G. Nickerson swore an affidavit that neither Lowe or Dickenson or Amoretti had ever occupied the property. This is part of the property abstract.

In 1920, the mortgage was held by Elmer Church who used it as a theater before the Grand Theater was built in 1928. Traveling troupes of performers put on melodramas such as “Uncle Tom’s Cabin” and “The Drunkard ”. Silent movies were also shown in the venue. Captain Nickerson’s daughter, Edith organized many of the cultural events that took place on the Bossert stage.

In 1928, the same year the Grand Theater opened, the property was sold for tax debts to Central Trust company. Elmer Church was able to redeem the property in 1932 and it was then sold to Russel Davis in 1939.  At various times the building housed a Piggly Wiggly grocery store and pool hall, Lander Saddlery and Lander Corral, a western wear shop. For a short time, a toy store occupied the building.

Many business endeavors have occupied the Bossert building through the years. For a short time, High Country News, the environmental newspaper started by Tom Bell ran their operation out of the building.

After the Fremont Hotel burned, Irene Bernier moved her restaurant to the second floor of the Bossert building.  Wyman’s dinner theater used the building and performed musicals such as Fiddler on the Roof and Man of La Mancha with local talent in the 1980s. Today the Lander Bake shop bakes their breads and pastries in the Bossert building and it continues to be a meeting place for the citizens of Lander.

Thru October 2022, 9-5pm Monday-Saturday, at the Pioneer Museum, “Hurrah for The Cowboy: Men of the Open Range” Art Exhibition

The Dubois Museum, the Pioneer Museum in Lander and the Riverton Museum need your financial support.  In the current economic environment, the museums are more reliant than ever on donations from the private sector to continue to provide the quality programs, collections management, exhibits and services that have become their hallmark over the last four years.  Please make your tax deductible contribution to be used specifically for the benefit of the museum of your choosing by sending a check to Fremont County Museums 450 N 2nd Rm 320 or taking it directly to the museum you choose to support.