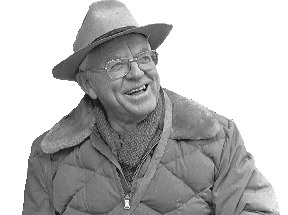 Photo courtesy of the University of Wyoming

Geologist David Love was an esteemed geologist and conservationist born in Riverton, Wyoming in 1913. He was raised on Muskrat Creek between Moneta and Castle Gardens, the petroglyph site near Gas Hills. His mother Ethel Waxman earned a degree from Wellesley College and came to Wyoming by stagecoach to work as a school teacher. His mother taught her children at home for much of their early education and included Classical Greek and Latin along with French in their studies. Love graduated from Fremont County Vocational High School in Lander before studying geology and chemistry in Laramie earning a Bachelor of Science degree and a Master of Science degree from the University of Wyoming. He continued his education at Yale and earned a doctorate degree in 1938. He spent three summers doing fieldwork in the Absaroka mountains to earn his doctorate degree. The Absarokas remained special to him, and his ashes are scattered there.

Love worked briefly for Shell Oil company before joining the US Geological Survey where he worked until he retired. During World War II, Love helped the government find uranium at Pumpkin Buttes and vanadium, a strategic metal that was used to strengthen steel for armor plates on ships, aircraft, and tanks.

One of his proudest accomplishments was producing a geological map of Wyoming in 1955 and revising it again 30 years later.

John McPhee’s book, “Rising from the Plains”, was inspired by David Love’s life story and the lives of his parents and the geology of Wyoming. Love pointed out how geology determined where people chose to build towns. Love traveled with McPhee across Wyoming in a Bronco and explained the geology of his beloved state.

Love was one of the last great field geologists following the fault lines, mountain ranges, and escarpments and reading the past in the rocks. Today, with satellite imagery and computers much of the work can be done from a lab.

In 1992, Love and wife, Jane donated an acre of land in Jackson to build 15 units of affordable housing. Love had a lifelong social consciousness and was the first geologist to be concerned about the health and environmental consequences of mining. Love was known for his interest in selenium, a naturally occurring element in Wyoming, and how it affected human and animal health. In small amounts, selenium is a recognized nutrient acting as an antioxidant, but in large amounts it is toxic. Non-water-soluble selenium occurs in Wyoming rocks, but woody asters and other non-native plants take up selenium and concentrate it, and when the plant dies microbes and fungi convert it to a water-soluble form. Old-timers called selenium poisoning alkali disease or blind staggers. Love told a story of a flock master in the Lysite area who was warned not to graze his sheep in a certain area, but the shepherd saw good grazing and ignored the local cattleman’s warning believing the cattlemen wanted to keep the good grass for their cattle. The flock died of selenium poisoning.

Selenium poisoning may have played a part in the delay of relief cavalry to Custer at the Battle of Little Bighorn. The officer in charge of the relief cavalry blamed the delay on a “peculiar sickness” in the horses after they traveled through some alkali territory today known to be high in selenium.

Love was an activist and worked diligently to preserve the wilderness, especially the Red Desert. In 2000, he supported a plan to limit drilling in the Red Desert.This plan was opposed by oil and gas interests.

I had an opportunity through NOLS to go on a geology field trip with Dr. Love up on Table Mountain. We drove through Dave Reynold’s property to the top of Table Mountain where Love pointed out the Triassic Red Beds and the Cretaceous Sandstones. He pointed out the inclines and synclines where oil and gas accumulate. Love also pointed out formations formed by seas that covered our landscape in the Cretaceous period and left layers of toxic sands where even today grasses won’t grow.

Love was the first contributor to High Country News, an environmental newspaper started by Tom Bell.Bell described Love as, “A contradiction of sorts. He saw what was happening to the open range, but he also felt the economic needs of the state. In that respect, few men have more personified the beauty and bounty of Wyoming and the Mountain West.”

John McPhee, the author of Rising from the Plains wrote of Love, “He carries within himself some of the central paradoxes of his time. Among environmentalists, he seems to be a good deal less lopsided than many, although beset by contradictory interests, like the society he serves.”

McPhee asked Love about the open pit iron ore mine south of Lander. Love answered, “They’ve only ruined one side of the mountain. Behind the pit, the range top is covered with snow. I can live with this. This is part of the lifeblood of our nation.”

Photography on exhibit in the Western Gallery through December