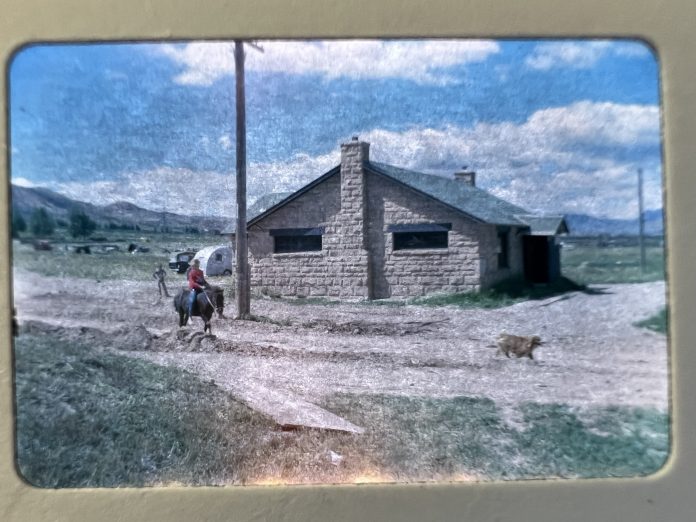 Esther Mockler was instrumental in establishing a community library for Dubois in 1936. The building that would house the first library was a dirt-roofed cabin donated by Dubois Mercantile that originally served as the first high school in 1925. The library became a reality due to the dedicated community members who made donations of cash, books, time, and labor. The library opened its doors for the first time on January 16, 1937, with 688 books available to its patrons. The Fremont County library system recognized the small library by establishing it as a branch library of the county system, relieving the board from paying for electricity and the librarian’s wages.

Velma Rosebrook was the first librarian and served for two years until her family moved to Texas. Velma knew Mary Back had worked for four years in the Berea College Library in Kentucky and had taken several courses in library science. Mary was asked to be the next librarian along with Bernice Welty as a volunteer librarian. According to Mary, the library consisted of “200 books in an ancient log shack.” In 1940 she became the official librarian, driving to Dubois to open the library two afternoons a week, receiving $16 a month for her work. According to Mary’s Way, A Memoir of the Life of Mary Cooper Back by Ruth Mary Lamb, “she expected the unexpected, so the day a Holstein bull walked through the door didn’t faze her. She just marched him back outside — all in an afternoon librarian’s duty.”

As the library continued to grow, it became more apparent that the old schoolhouse cabin turned library was no longer suitable. Esther Mockler told the board that it was time for a better library building; one that was fireproof and permanent. The Dubois Development Company donated a plot of land near the schoolhouse. Laurence Williamson, one of the board members, read everything he could find about library buildings and then drew then plans himself. Most of the work was donated, as almost everyone in town and the upper valley contributed by providing funding or labor for the new building. The outside of the new library was framed with locally sourced sandstone and featured a pine-paneled interior. As an added benefit, Ramshorn Peak was visible through the library’s two large windows.

On October 19, 1941, a ceremony for the laying of the cornerstone took place. The State Librarian, Gladys Riley of Cheyenne came for the event. P.B. Coolidge, president of the Fremont County Library Board, along with Esther Mockler, Mary Back, and the school band participated in the program. There was a housewarming dance at the library on October 30, 1941. The opening of the library was planned for the early months of 1942. This building served as the community library until construction on the current building began in 2001 and opened in 2002. Today’s library has come a long way since its predecessor with a dirt-roof and continues to serve the growing community and offers events, computer access, educational opportunities, book and media rentals, and book fairs.

The Dubois Museum, the Pioneer Museum in Lander and the Riverton Museum need your financial support.  In the current economic environment, the museums are more reliant than ever on donations from the private sector to continue to provide the quality programs, collections management, exhibits and services that have become their hallmark over the last four years.  Please make your tax-deductible contribution to be used specifically for the benefit of the museum of your choosing by sending a check to Fremont County Museums 450 N 2nd Rm 320 or taking it directly to the museum you choose to support.

Did you know? The value of eggs

New Year, New….Recliner! Gambles is helping you kick off 2023 the right way