Starting things off was the swearing in of the newest Riverton Police Department officer, J.J. Pingetzer. Pingetzer was born in Lander, raised in Riverton, and graduated from Shoshoni.

A discussion of Ordinance No. 21-005 concerning unauthorized use of a motor vehicles also ocurred tonight.

“Currently citations for unauthorized use of a motor vehicle or car theft are written and processed through Circuit Court. The Riverton police department has worked over 30 stolen vehicles over the last year,” stated Police Chief Eric Murphy.

“We’re asking that we adopt a new city ordinance so that we can start processing these through our Municipal Court. It will allow officers to issue citations through Municipal Court rather than through Circuit Court, a judge can issue a fine up to $750 for an unauthorized use of a motor vehicle. This will help with financial stability for the city.”

The council approved the first reading of the ordinance.

Additionally discussed at length were potential locations for a dog park, with a section of the riverwalk being decided upon. The park will eventually include a fountain, divisions for small and large breed dogs, and will utilize wood chips rather than grass.

It was also decided that the Riverton airport will now partner with the Lander airport to rotate the yearly fly-in airshow. Lander will not have have an airshow this year, so there is potential for Riverton to host this year in the fall, if there is enough time to plan.

The council also voted for and swore in Air Force veteran and former Riverton Airport Board Chairman Dean Peranteaux to fill the ward one vacancy until 2022.

Congratulations, and welcome to the council Dean!

A general consensus among all Council members was the rousing succes of the Riverton Rampage Rumble Soccer Tournament and the Boys and Girls Club of America pancake breakfast.

Hopes are to see more community events like these throughout the summer. 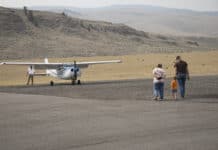