(Riverton, WY) – Fremont County School District #25 had it’s board meeting last night, April 13. Among the highlights were a Frontier Academy graduation, a petition for a mask variance for FCSD #25, and a brief discussion on House Bill 173.

Congratulations to Dayton Dade Enos on his successful graduation from Frontier Academy! Way to go!

The chief concern of Tuesday’s meeting, was a petition requesting a mask variance for FCSD #25, and the board’s decision regarding that matter.

This petition, spearheaded by concerned Riverton mother Christa Hauser, had 232 signatures from mostly Wyoming citizens, and even residents from other states.

Hauser’s main concern was the negative effects of the masks on children.

She also reasoned that other school districts across the state have granted mask variances, vaccines are becoming more readily available for those who choose to get them, and that Governor Gordon’s lifting of mask mandates for the state should be applied to schools as well.

Another concerned mother, Abigail Vaughn, a district employee, urged the board to hold off until the end of the year, and while agreeing with Hauser in terms of her concern for the children, stated “We can’t give up now.”

Upon hearing from all parties, the board discussed the logistics of the variance, and how it would apply to the Wyoming Department of Education (WDE) Smart Start Plan.

“Protocols remain the same as what was approved by the WDE at the beginning of the year. It follows the requirements of the Smart Start Plan.The Smart Start Plan has always had masking in place even when therewas no state mandate back in August when we started, so even thoughthe Governor has lifted the mandate in public places the WDE Smart Start Plan still requires masking when social distancing is not possible.”

The Smart Start Plan allows for mask variances to be put in place based on the approval of either local or state health departments. Fremont County currently does not have a local health department, so it relies on state department health orders.

According to these state orders, only districts in counties with the ‘low and lowest transmission levels’ (guidelines to these levels, and a county by county number breakdown, can be found here) for a continuous two weeks are eligible for a mask variance, and must stay in that low level indefinitely.

Taking into consideration the events of the evening, combined with personal testimonies, and state health orders, the board decided on a compromise.

The failure of House Bill 173 was also discussed after it went to conference committee and did not go through. This bill planned for extra aid in budget and “increasing operating balance and cash reserves” for Wyoming schools.

May 11th FCSD #25 school board meeting to discuss potential mask... 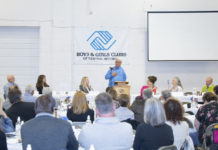 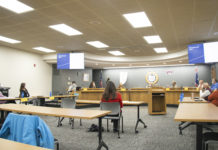 FCSD #25 Board to decide next steps about weekend arrest