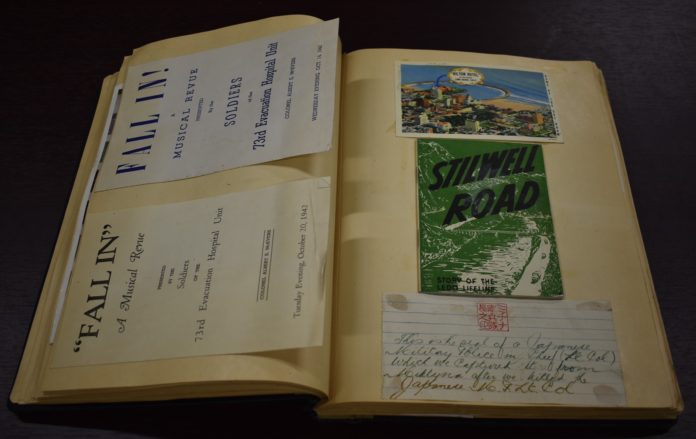 Some people scrapbook. These people collect and preserve small scraps of printed materials they find significant and meaningful to their personal memory or as a collective community memory. This is not an unusual practice in the history of humans.

The first semblance of a scrapbook was made in the Middle Ages. Throughout the Renaissance what was called a commonplace book, a bound journal with information from a variety of sources written in it, was a common household item.

The Lander Pioneer Museum has a new lobby display on local scrapbooks from 1885 up through the 1950s. The content of the books ranges from local news and gossip from the 1880s to a scrapbook of signed Hollywood movie star photos. The display will be on exhibit at the Museum through the spring of 2021.

Between the 1600s and 1700s, archival albums were created to compliment cabinets of curiosity which featured personal collections of interesting 3D objects. The album would hold drawings, writings, or announcements the owner found equally intriguing as their collection of objects. During this same period, extra-illustrating books became a popular pastime. This practice encouraged people to paste their choice of cutout images or to draw illustrations in an existing book or to unbind the book and add pages they had decorated to a book.

It was the invention of the printing press, the development of industrial papermaking and printing in the early 1800s that led to the modern-day scrapbook. Mass production of newspapers, magazines, advertising flyers, greeting cards, wedding, birth and even death announcements, tickets, and event programs allowed most people easy access to printed information, news, and images. People young and old were compelled to create books of personal significance.

A scrapbook will vary as much as the person who creates it. Membership clubs create scrapbooks to document their organization. Individuals track their personal history mounting everything from greeting cards, concert tickets, ribbons, dried and pressed flowers to announcements, and favorite quotes or jokes. In the early 1900s women were encouraged to create scrapbooks of published and handwritten recipes, while others focused on news clippings from their hometown papers. Articles and pictures pertaining to politics and war to poetry and that beautiful dress was seen in a magazine can all be found within a single book. Topics or themes within scrapbooks by their nature vary greatly but not always. Some craftspeople are very specific to the theme their scrapbook follows.

It is believed that the word scrapbook was first used in 1821 as a noun. In 1879 it also started to be used as a verb. So popular was the craft Mark Twain patented a self-pasting scrapbook in 1872 which made him significant financial profit.

A scrapbook tells a story with the bits and pieces it displays. A timeline of sorts as each page is turned. From world to local news, memorable occasions, and mementos the scrapbook reflects the era of its creation as well as gives insight into the person who took the time and made the effort to preserve a slice of their personal and our general history