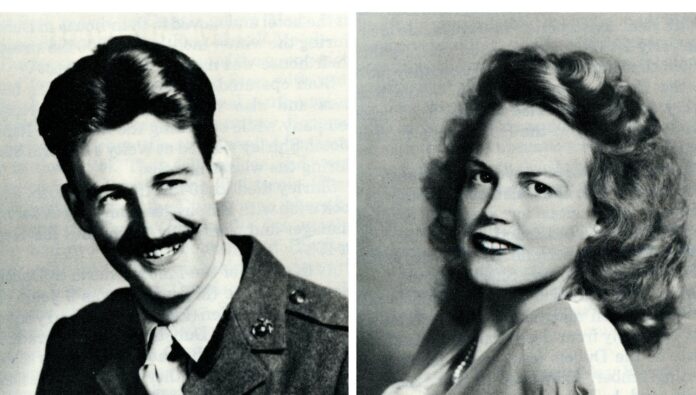 Albert (Ab) W. Cross was born in 1921 on the Cross Ranch to George and Elsie (Wilkinson) Cross. Ab grew up just outside of Dubois in the Dunoir Valley and was raised to work hard and help out on the family ranch. The H Bar Ranch was established by his grandmother, Edith Cross, and was later operated by his father, George. Ab and his younger brother, George, attended the small rural school on the Cross ranch.

Bill Butkovich remembers attending the Cross school and was invited to attend by Ab’s father, George, as they lived closer to the Cross school than the Dubois school. George told Bill’s father that he was starting a school at his ranch that fall as his oldest son, Ab, was going into first grade. The Butkovich brothers walked to school in 1926 and ‘27 and trapped along the way, shooting rabbits, and skiing in the winter. Mattie Lee Clayton was the first teacher at the Cross school and Alice Latta taught later in 1936 and ‘37.

The county eventually had a shuttle bus for students who lived on the Dunoir to attend the Dubois school. However, the Cross brothers still had to walk across hay meadows to the road to be able to meet the bus. The boys carried their guns with them on their walks as there were often moose who didn’t appreciate the ‘intruders.’ The brothers had to turn in their guns at the school office and could pick them up after school. After finishing middle school in Dubois, Ab took correspondence courses at the ranch for his first two years of high school, since the closest high school was more than 90 miles away.

In 1936, Ab was enrolled at the Riverside Military Academy in Gainesville, Georgia, for his third year of high school. In January of 1938, he enrolled in the Colorado Military School in Denver and graduated that spring. He returned to Denver in the fall and attended Barnes Business College while taking extension courses from Colorado University in Boulder and working to complete his National Guard extension course from Colorado Military School. Ab also took pilot courses in Denver and participated in his first rodeo. According to Dubois Area History, “Ab soon gave up flying and rodeo when he discovered he could fly higher off the rodeo arena than he could off the airport!”

Grace Meeks and Ab married in 1940, Ab was 19 and Grace was 22. Grace had thirteen siblings and Ab only had one brother, so they met in the middle and had four children: Albert, Jock, Phillip, and Lisa. Ab joined the Marine Corps in 1945 in Denver and was discharged a year later in Camp Lejeune, North Carolina.

He devoted much of his time to the Masonic Lodge. His masonic memberships included Dubois Lodge No. 53, Mt. Horeb Chapter No. 6 in Lander, Lander Council No. 4, and the Hugh DePayen Councilary No. 7. He was also a Thrice Illustrious Master, Holy Royal Arch Knight Templar Priest, and held the Knights of the York Cross Honor.

Much like his father, Ab grew up ranching and always knew he wanted to operate the family ranch one day. The H Bar Ranch had 10,000 acres of deeded land and 1,000 head of cattle at one time. Ab went on to own the family’s Dunoir ranch, by purchasing half an interest in the H Bar Ranch in 1946 and the other half in 1960. Grace and Ab’s log home was built in 1947 by Joe Hagstrom, who was a master builder and logger. George, Ab’s brother, went with their father to operate the family’s 9,100 acre ranch they purchased in 1951 near Sebring, Florida.

Grace and Ab later purchased a ranch in Sebring, Florida, near the family ranch, and spent several winters there. Ab had achieved his dream and ranched in the Dunoir Valley for most of his life. Ab passed away in 1985 after a long illness. Grace spent her summers at the Cross ranch outside of Dubois and the winters in Arizona until she passed in 1998 in Yuma, Arizona.

August 17, 7pm at the Dubois Museum, “Music at the Museum: Packin the Mail”

August 24, 7pm at the Dubois Museum, “Music at the Museum: Jan Marrou”

August 31, 7pm at the Dubois Museum, “Music at the Museum: Packin the Mail”