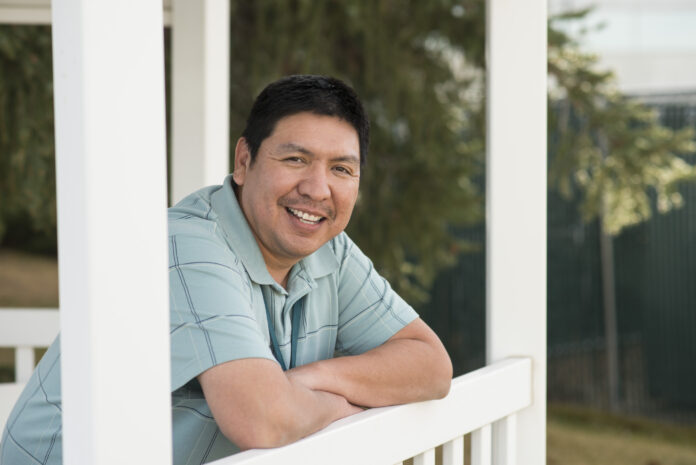 Charles Aragon is working to dismantle health and healthcare disparities for his Native American community one patient and one family at a time. As Native American Patient Advocate at SageWest Health Care, Charles has worked for more than a decade to improve health and ease healthcare disparities by bridging the cultures of the Northern Arapaho and Eastern Shoshone communities and the majority non-Native population employed at the hospital’s two campuses.

Charles’ healthcare journey began with a lot of luck. “I was working for the Eastern Shoshone Tribe, filling in part-time doing maintenance and custodial work at the community center in Crowheart, Wyoming,” he said. “They were starting a tribal health program and moved in fitness equipment. I inquired about the program and began working as a fitness monitor.”

The area was populated by ranchers, people who were already active, and others who were accustomed to going about their own business. “Nobody even talked about working out.  We really had to build up the program to get people to attend,” Charles said. Over time, the community center built a fitness following of about 20 people attending two or three classes offered each day.

After a series of promotions, Charles became interim director of tribal health at the community center. Those years of expanding expertise in connecting tribal members to essential healthcare and social services led him to a new career at SageWest.

“These health disparities,” Charles said, “are rooted in generations of unhealed historical trauma that can’t be fixed,” Charles explained that Native American communities have not recovered from forced removal from tribal lands, nor the removal of Native children to boarding schools, which forever changed Native languages and customs. Mistrust in institutions, like a hospital, remains.

Charles works diligently to connect with patients and ease their worries. “I like to sit with them. Talk to them. Relax them,” he said. “Often, we won’t talk about anything related to why they’re at the hospital. We just talk about what’s happening at home or in life.”

One notable cultural difference is eye contact, which Charles has had to train himself to maintain with non-Natives. “Native people learn from a young age not to look others in the eye. We are taught not to make eye contact when our elders are speaking, because to do so would be to challenge them,” Charles explained. “So, I train new staff to understand that when a Native patient won’t make eye contact, the patient is not ignoring the information. They are listening, and they are showing respect.”

At SageWest, Charles has carved a leadership role, both advocating for and representing his Native culture, and continually educating staff in how to ensure equitable care to the 22% Native American population of Fremont County. New employees at every level, including providers, receive Charles’ Native American cultural sensitivity training.

“They really get into it and start asking a lot of questions,” Charles said. “I think they get a lot out of it.”  Charles accepts staff feedback and seeks counsel from elders to continually improve the training and maintain the quality of care for Native patients at SageWest. “The presentation is really the work of the whole community,” he said.

Regardless of a patient’s cultural heritage, Charles said, his job is to ensure that every patient feels safe and empowered to be active in their care. “We have a lot of behavioral health needs,” Charles said. “I help them navigate the court system, placement if they don’t know where they can go, or with unique circumstances at home. We do as much as we can so every patient can be successful.”

Charles encourages new staff and providers at SageWest to ask questions and get to know the Native community, study traditions and cultural norms, respect generational traumas that can affect patient behavior, and even attend pow-wows, all to build trust between cultural groups. Actively seeking out opportunities for multicultural understanding is not limited to Native/non-Native communities. Charles says that hospitals across the country can offset known disparities in health and healthcare by actively getting to know the people who live in their communities.

“Everything and everyone you need is right there in your community,” he said.

– By Rachel Anger of the ScionHealth Marketing and Communications team, in partnership with James Poullard, Senior Vice President of Support Services, Health Equity and Experience