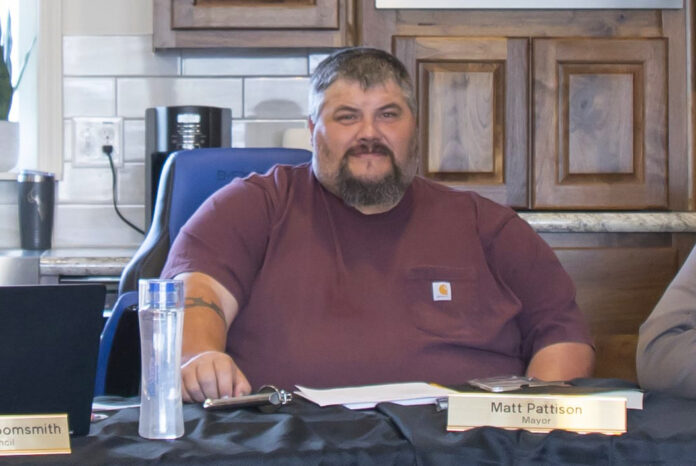 (Pavillion, WY) – County 10 has contacted all of the mayoral candidates across the County to ask them a few questions.

Matt Pattison, the current mayor of Pavillion, is running for a second term. He has lived in Pavillion pretty much his entire life and has owned his own trucking business for the last 23 years.

Below is a Q&A transcript of our interview, which has been edited for clarity and length.

County 10: How did you become involved in government?
Matt Pattison: Starting in 2019 is when I first got on the council, and the reason I decided to get involved was looking at it from a perspective of common sense, and being a good businessman.

C10: Why are you running for another term?
MP: I want to keep things going, and get things put in place before I hand it off to somebody.

C10: What is a challenge you’ve faced during your time as mayor?
MP: The most prominent challenge was dealing with an embezzlement. I’ve never, you know, had to go through one of those or be any part of something like that. So you know, and looking at all the employment of different agencies involved. Talking with the state, county, different officials, putting all that puzzle together, and working with everybody. That was a major challenge for me, you know, and you’re not gonna deal with that kind of work. You’re thrown to the wolves, and it’s like, where do you start, you know, what do you do? You may make a mistake. I guess I shouldn’t have done that. But you put your boots on, and you talk to other people. I had a lot of guidance from the other mayors – look at doing this, look at this avenue. So having those types of people backing you up and giving you advice has been a major help to me. So, that was my biggest challenge is stepping into the mayor role and getting that correct. And is it gonna be 100%? I’d liked it to be, but you know, you deal with the cards you’re dealt, and you do the best you can.

C10: What do you believe is the most pressing issue facing town council this year?
MP: The big thing is working towards stability on the council. I do have a full council now and got a couple of them running but having that stability in a council. You have a massive turnover and, you know, keep rolling. It’s really hard to do business and keep everybody up to speed, and with you know, if you got a water line project, and you have two members of your council step down or resign, two new ones step on, trying to keep everybody up to speed sometimes you got to backtrack and kind of fill in the gaps to where you’re at. And then you have someone else step out; someone else comes on. It’s just kind of a repetitive process. So just trying to keep stability there.

C10: What is one thing you wish people knew about Pavillion?
MP: So many people you talk to don’t really recognize Pavillion because we’re off on the beaten path. You drive through Shoshoni, and you drive through Hudson going between Lander and Riverton. Pavillion, unless you make the wrong turn at the four-way, you know, it’s hidden. Unless you live out here, kids are in sports with the school, or you go to parties, you go to rodeos or whatever, you know. We’re trying to get Pavillion back on the map with things like our July 3 community events. We’re trying to do some things not just for the town but the surrounding community.

C10: Is there anything else you wish to share?
MP: Not off the top of my head.

Additional questions and answers can be found here on the League of Women Voters Fremont County Primary Election Voter Guide.

County 10 does not endorse any political candidate and strictly separates news from advertising. To learn more about political advertising with County 10 or to submit election news, click here.

Three candidates selected for interim Secretary of State on Saturday

Lucero running for CWC, FCSD #25 Board of Trustees