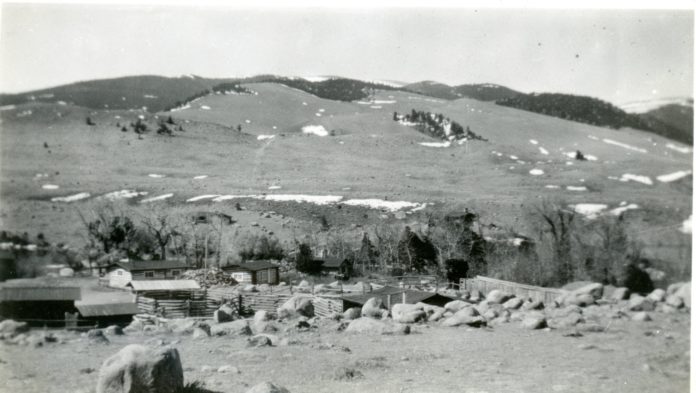 Like many ranches around Dubois, Torrey Lake Ranch was developed on a homestead patent. Usually, land patented for homesteading was intended to be used for agricultural purposes. However some people filed preemptive notices on homesteads that were clearly not meant for agricultural development – these homesteads were instead developed as entrepreneurial investments as dude ranches, tourist facilities, residences, outfitting camps, or simply as real estate speculation.

A small number of these non-agricultural claimants were “gentlemen ranchers” – men who continued the 19th-century social tradition of cattle barons by inviting their friends for hunting parties and recreation. By the time the automobile became popular on the recreational scene, “gentlemen ranchers” served numerous visitors and perpetuated the glamour and romance of the Old West with rustic and unique accommodations. Torrey Lake Ranch was one of these ranches and it is the only known “club” established with a homestead patent as a recreational resort, formed by and for the benefit of a close group of friends.

In the summer of 1901 two outfitters, Harry L. and Will Angelo met a party of 14 men, women, and children in Rawlins. The group was organized by Mr. John R. Boardman from Ottawa, Kansas and it was during this trip that he saw Torrey Lake for the first time. He returned again in 1908 and in 1915 bought property near Torrey Lake which included a log house and log cabin. By 1918, Boardman and his family were summering on the lake and they decided to homestead 640 acres there in 1921. An additional 120 acres were added as a “desert claim” the same year. Boardman and two friends then formed a corporation called “Torrey Lake Club” to “park, boulevard, and construct buildings, sub-divide into lots and tracts, and otherwise improve real estate for the purpose of establishing and maintaining a pleasure club”.

The Club was short-lived and officially dissolved in 1926 when it was incorporated as Torrey Lake Ranch. The new incorporation included 3000 acres of land, 250 head of cows plus bulls and calves, and 60 head of horses. Although primarily a cattle ranch, it remained a retreat where friends and family could experience what it was like to live comfortably but without the advantages of modern society until the onset of the Great Depression when it too became a victim of financial difficulties.

June 9, 9 am at the Dubois Museum,“Making Ice Cream”

June 10, 7 pm at the Dubois Museum,“Learning About American Prisoner of War Camps Across America” by Kathy Kirkpatrick

June 12, 2-4 pm at the Riverton Museum, “Dig into the Field of Archeology”