#Lookback: The Men of the Rocky Mountain Rendezvous: Thomas Fitzpatrick 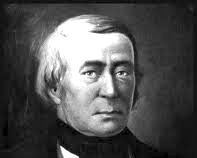 The third man discussed in this series is Thomas Fitzpatrick. Little is known about Thomas Fitzpatrick’s early life. He was born in County Cavan, Ireland, in 1799, and he immigrated to the United States when he was seventeen. After immigrating, Fitzpatrick traveled to the Midwest where he began trading with the Native Americans in his area. (2)

In 1823, Thomas Fitzpatrick began his career as a fur trader by joining William H. Ashley’s expedition west up the Missouri River to Fort Henry. After Ashley’s business venture at Fort Henry fell apart, Fitzpatrick and Jedediah Smith led an expedition in search of more plentiful beaver. Jedediah, Fitzpatrick, and their men wintered near a group of Crow in the Wind River Valley. The Crow told the men about plentiful beaver in the Green River Valley and explained an overland route to get to the valley. The group followed the Crow’s directions over the South Pass and began trapping in the Green River Valley. Jedediah Smith and Fitzpatrick ended up splitting their group into two parties to cover more ground. After the end of the trapping season, the two groups reunited and it was decided that Fitzpatrick would carry the furs back to Missouri, while Smith stayed in the Green River Valley to continue trapping. (2)

At the Sweetwater River, Fitzpatrick and the men who were returning to Missouri built a bull boat and loaded their furs onto the boat. However, the journey down the river was rough, which induced them to abandon the boat and continue the journey to Missouri on foot. The group led by Fitzpatrick stopped briefly at Fort Atkinson in present-day Nebraska. At the Fort, Fitzpatrick wrote a letter to William H. Ashley about the plentiful beaver in the Green River Valley and asked him to come west with a large party to take advantage of the bountiful harvest. When the letter was sent, Fitzpatrick hired some pack horses to carry the furs and continued his journey to St. Louis. (2)

In the fall of 1824, William H. Ashley organized another expedition with supplies and trade goods to travel west to the Green River Valley. Thomas Fitzpatrick was the guide for the expedition. The party reached the Green River in April of 1825. Once they arrived, Ashley divided the party into small groups and arranged a rendezvous for all the teams in early July. Fitzpatrick was one of the group leaders and decided to travel up Rendezvous Creek and trap in the streams running north from the Unita Mountains. At the end of the season, Fitzpatrick reunited with the other groups at the first Rocky Mountain Rendezvous near McKinnon, Wyoming, in July. Ashley’s account books record that Fitzpatrick brought 140 furs to the meeting. Whether that was Fitzpatrick’s personal contribution or the contribution of the party he led is unclear. (2)

There are not very many details about Thomas Fitzpatrick’s next couple of years.One tale was recorded by a member of Fitzpatrick’s party, Jim Beckwourth, about the theft of some of their horses when they were camping near the Great Salt Lake.This excerpt from his account describes how the horses were retrieved:

We then divided our forces, Fitzpatrick taking command of one party and James Bridger the other. The plan resolved upon was as follows: Fitzpatrick was in charge the Indians, and cover Bridger’s party while they stampeded all the horses, they could get away with. We rushed in upon the horses and stampeded from two to three hundred, Fitzpatrick at the same time engaging the Indians. We succeeded in getting off with the number of our own missing, and forty head besides. In the engagement, six of the enemy were killed and scalped, while not one of our party received a scratch.

After the second Rendezvous of 1829, Thomas Fitzpatrick traveled with William Sublette north to the headwaters of the Missouri.En route, the group ran into a group of Blackfeet who tried to stampede the trappers’ horses.Joe Meek, one of the party members, recounted the incident as follows:

Only a few of the animals have been turned out, and they had not yet got far off.The noise of the charge only turned them back to camp.In an instant’s time, Fitzpatrick was mounted, and commanding the men to follow, he galloped at headlong speed round and round the camp, to drive back such of the horses as were straying or had been frightened from their pickets.In this race, two horses were shot under him; but he escaped, and the camp-horses were saved.

After this incident, Fitzpatrick continued traveling in the west until the 1830 Rocky Mountain Rendezvous near Riverton. At the end of this Rendezvous, Jedediah Smith, David E. Jackson, and William Sublette sold their shares in their fur trading company to five of their most competent employees. Thomas Fitzpatrick was one of the five who now owned shares in the company, which was renamed the Rocky Mountain Fur Company. The five men split into two groups after the Rendezvous to continue trapping beaver. Fitzpatrick and two other partners trapped beaver up in Montana until March of 1831.(2)

In March of 1831, Fitzpatrick took one man from his party east to St. Louis to obtain supplies to be traded at the next Rendezvous. He reached Missouri in May and encountered David Jackson, William Sublette, and Jedediah Smith, his suppliers, on the way to Santa Fe.Fitzpatrick decided to follow his suppliers to Santa Fe to receive the wanted supplies. This caused a costly delay because Fitzpatrick ended up missing the 1831 Rocky Mountain Rendezvous.Henry Fraeb, one of Fitzpatrick’s business partners, met up with him and collected the supplies so that Fitzpatrick could head back to Missouri to gather supplies for the 1832 Rocky Mountain Rendezvous.(2)

During the winter of 1831-1832, Thomas Fitzpatrick set about solving the Rocky Mountain Fur Company’s financial worries. The company had been unable to get their furs to market in 1831 because of Fitzpatrick’s delay in getting supplies. So, the company’s credit was low. Fitzpatrick made a deal with William Sublette to bring a train of goods to the 1832 Rendezvous and advance Fitzpatrick some cash and credit.(2)

After this, Fitzpatrick continued fur trapping and attended the Rocky Mountain Rendezvous until the beaver traded faded. The last Rocky Mountain Rendezvous was held near Daniel, Wyoming, in 1840. Once his career as a trapper ended, Thomas Fitzpatrick started his second career as a guide to settlers traveling on the Oregon Trail. In the spring of 1843, John C. Fremont, the namesake for Fremont County, hired Fitzpatrick as a guide for his second expedition. The second expedition traveled along the Oregon Trail, into California, and explored Oregon before returning to St. Louis in August of 1944.(2)

In 1846, while employed by S.W. Kearney as a guide, Thomas Fitzpatrick was ordered to take a message brought to Socorro, New Mexico, by Kit Carson east to Washington D.C. Once he arrived in the capital, Fitzpatrick received an appointment as an Indian Agent for the region of the Upper Platte and Arkansas. This appointment launched his third career as an Indian Agent. One big milestone in his third career included participation in the Fort Laramie Treaty of 1851. The Fort Laramie Treaty of 1851 was between the United States, the Cheyenne, Sioux, Arapaho, Crow, Assiniboine, Mandan, Hidatsa, and Arikara. This treaty stated that the U.S. acknowledged that the land covered by the treaty was Indian territory. The Native Americans agreed to guarantee safe passage for settlers traveling on the Oregon Trail and allow the construction of roads and forts in their territories. (2)

During his time as an Indian Agent, Thomas Fitzpatrick married Margaret Poisal in November 1849. The couple had two children named Andrew Jackson Fitzpatrick and Virginia Thomasine Fitzpatrick. In 1854, Fitzpatrick was in Washington D.C. to negotiate a treaty with the Comanches and Kiowas. In his hotel in D.C. on February 7th, 1854, Fitzpatrick died of pneumonia. After his death, he was buried in the Congressional Cemetery.(2)

May 13th,7 pm at the Pioneer Museum “Wyoming Outlaws” By Ray Maple

May 14th-28th, 9 am-5 pm Daily at the Pioneer Museum “Abraham: Out of One, Many” Art Exhibit in the Western Gallery

May 18th,9 am -2 pm at the Dubois Museum “Mason Draw Adventure Trek”