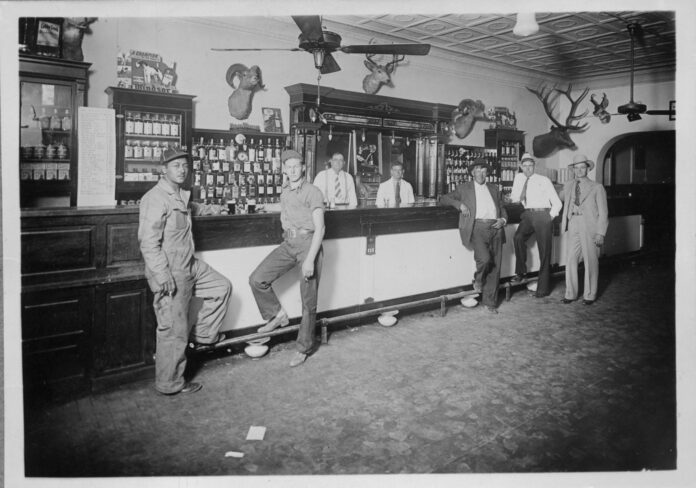 Wyoming became a dry state in 1918 by a huge majority vote a full year before the 18th
amendment to the U.S. constitution passed and made alcohol illegal in the United
States. The fact that women’s suffrage was legal in Wyoming may have played a part
in this majority vote. The Eighteenth Amendment passed in 1920 and made it illegal to
manufacture, sell or transport alcoholic beverages in the U.S, but bootleggers continued
to distill alcohol in Fremont county throughout the 1920s and the early 1930s.
Newspaper articles from the time describe raids in Hudson, Shoshoni, Lander and
Riverton, and Lysite.

According to one newspaper article, a large raid went down in Hudson in 1927. Hudson
was a hardworking, possibly hard-drinking coal mining town at that time. The coal
mining was starting to wind down in Hudson.

Quoting from the newspaper article, “Deputy Thompson had been on the watch for
some time and Sunday night he laid out to see the operations recognizing men from
Lander, Riverton and Shoshoni coming for liquor and gaining much interesting
information in the prosecution of further violations of the law.”

“Three home distilleries were discovered on Sunday. At Peter Jeniro’s place, they
found a 50 gallon still in the garage with 7 barrels of mash with a coil and stove ready to
operate. No alcohol was found but 32 empty sugar sacks were discovered.”
“Tony Ocha had his 30 gallon still in the cellar of his residence. Four barrels of mash
and two quarts of alcohol were taken.”

“Carnelo Rotolo operated at home also and a 40 gallon still and 5 barrels of mash were
found in an outbuilding at the rear of the lot. Indications showed that there should have
been liquor about the place but a strict search proved fruitless until one of the officers
noticed the end of a pipe corked with the top flush with the floor. This was located under
the sink and not easily observed. Knowing this pipe must lead somewhere they made
for the cellar and found nothing. The walls were solid and there was no container
anywhere. Starting to dig outside the wall there was no evidence until they got down a
reasonable depth where there was a barrel. Going back to the cellar and working on the
wall they found a secret slide which revealed a faucet. The barrel was full and the 50
gallons of liquor made the biggest haul of the night.”

In May 1922, thirteen men were arrested on bootlegging charges during a two-day
period in Riverton and Hudson. More arrests were expected soon.

In June of 1927, a well-known Hudson operator escaped arrest by using a long tunnel
from a cabin nine miles north of Riverton, but inside the cabin officers found 2000
gallons of mash and a 100 gallon still. One hundred and twenty gallons of whiskey was
found buried in the creek bed in 10 gallon kegs. Hudson was evidently a hub of
bootlegging activity. Some distillery operators burned old tires to mask the aroma of a
functioning distillery. Rotolo, whose operation was discovered in 1927 was a World War
One veteran and worked as a coal miner. He later served in World War Two. He lived
in Hudson until the 1950s. Does anyone remember where his house was located? The
census shows no street address for Rotolo in the 1930s.

The Union Bar was raided by the sheriff and Frank Ninkovitch was arrested in 1924. He
had twice been arrested on similar charges, but returned to his illicit liquor business as
soon as he was released.

In December of 1921, raids were made in Lander. Officers expected to seize 200
gallons of moonshine. A brakeman for Chicago & Northwestern railroad possessed 3
gallons of hootch described as “walk a block and fall liquid.” Parts of a still were found at
Jason Witson’s place. Charges were brought against the Noble Hotel company and
H.G. Bizzell, the proprietor of the Noble Hotel Drug store.

Bizzell was selling large quantities of tincture of orange and other patent medicines with
high alcohol contents. Federal law allowed the sale of these medicines, but state law
made no exceptions for such medications. Bizzell was ordered to destroy his inventory,
but escaped further penalties.

Law enforcement conducted a raid in Lysite in 1924. Fourteen men and women were
detained and several gallons of liquor was seized. A dance floor had been constructed
in a ravine just out of sight of the rail line and was evidently a place to drink and party
and indulge in other adult vices.

Sheriff Burch made a raid in Shoshoni in 1921 where 25 people were arrested.
Gambling paraphernalia, which included roulette wheels and tables, commercial slot
machines, playing cards and two grain sacks full of poker chips were confiscated and
shipped to Lander by train filling one end of a freight car. Among those caught up in this
dragnet was the town marshall of Shoshoni and several businessmen. Probably, many
more residents of Shoshoni were involved than were actually arrested.

Fines collected for these violations and other liquor offenses padded the county’s
bottom line.

When arrests were made evidence was collected, which included bottles and kegs of
alcohol and pieces of stills were sent to Lander to be stored in the courthouse.

In May of 1929, District Court Judge R.H. Fourth ordered the destruction of liquor-
making paraphernalia and large quantities of finished product in the county’s
possession. Thousands of bottles, fruit jars and kegs of alcohol were destroyed behind
the courthouse. It took two hours to smash the alcohol containers, and fumes of alcohol
filled the air. Chickens in a nearby enclosure felt the effects of the alcohol fumes and
stumbled about their coops.

Prohibition was repealed in 1933 with the passage of the 21st Amendment.
The Eighteenth Amendment had been an unpopular failed attempt to control adult
behavior. Many people were arrested for defying the law, before the government and
the voters gave up and passed the 21st amendment which repealed prohibition.

The Wind River Cultural Centers Foundation has been created to specifically benefit
The Dubois Museum, the Pioneer Museum in Lander and the Riverton Museum.  The
WRCCF will help deliver the long term financial support our museums need to flourish.
In the current economic environment, the museums are more reliant than ever on
donations from the private sector to continue to provide the quality programs, collections
management, exhibits and services that have become their hallmark over the last four
years.  Please make your tax deductible contribution to be used specifically for the
benefit of the museum of your choosing by sending a check to Wind River Cultural

Centers Foundation at PO Box 1863 Lander, WY 82520 or taking it directly to the
museum you choose to support.