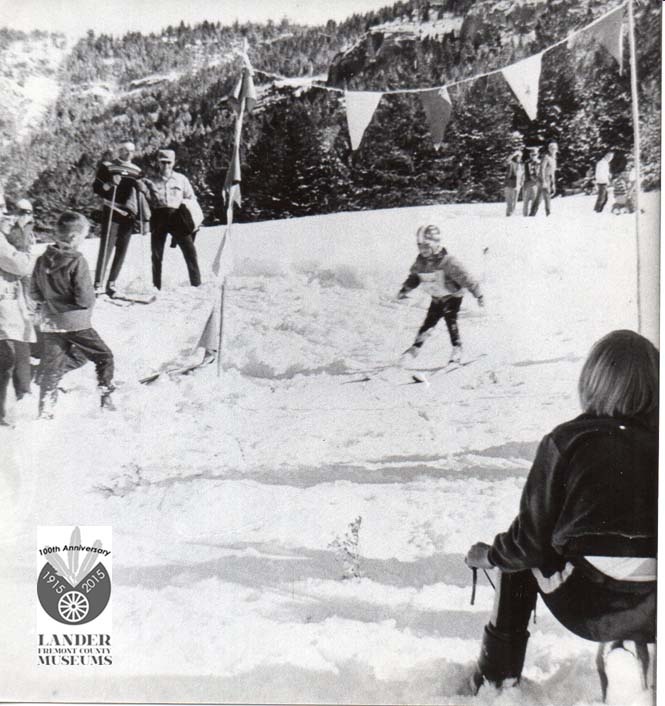 
A County 10 series in partnership with the Fremont County Museum System
where we take a #Lookback at the stories and history of our community and
presented by Mick Pryor, Financial Advisor with Edward Jones.

The Lander Pioneer Museum recently opened a new display on the old Sinks Canyon Ski area. Over the past year, a number of artifacts relating to the area were donated. The museum felt it was an important part of Lander’s recreation history and deserved an exhibit. One of the artifacts was a 16 mm film done by Fred Klein and Harry Tipton showing the area being built and in use. That film is incorporated into the exhibit.

After WW2, and with the post-war boom, Americans began recreating in new ways. Winter sports like skiing became popular around the country. In the 1950s Fremont County residents began talking about creating a ski area for the county. In the early 1950s, a small ski tow was in operation on Rock Creek near South Pass and another to Togwotee Pass north of Dubois, but skiers wanted a full-size area.

Dr. Harry Tipton, Fred Klein, and Skip Clark of Lander spearheaded efforts to build an area in Sinks Canyon. The canyon, just a few miles south of Lander was already a popular recreation spot for camping, fishing, and hiking, seemingly had deep snow and the elevation for ski runs.

In August of 1958, after receiving Forest Service approval, volunteers began laying out the Sinks Canyon Ski Area at the base of Fossil Mountain in the canyon. Throughout the fall volunteers cleared ski runs, moved a small warming hut from the South Pass area, installed a small motorized rope tow, and formed and trained a ski patrol.

From the beginning, the ski area was a community effort with as many as 100 people working on the area on some weekends. All of the materials and time were donated by Fremont County residents to build, maintain, and run the ski area. The original small warming hut was donated by the U.S. Steel iron ore mine and moved across the river via tractor. In 1960 the Forest Service donated a large barn from the site of the old Middle Fork Ranger Station. It was moved across the river and converted to a cozy warming hut with a huge, hand-built stone fireplace. Starting in 1960 a bus donated by Fremont Motors ran from City Park to the ski areas on weekends. In 1961 with money raised through Christmas Tree sales and donations, the ski club bought a new 4,200-foot nylon tow rope, ran new power poles and lines to a new electric motor, and for a time the Sinks Ski area had the longest tow rope in the country.

When there was enough snow, the ski area was used heavily and many residents learned to ski there. The ski area operated from 1958 until the early 1970s. But many years it only ran a few weekends out of the winter. Lack of snow was the main reason the area was often silent and finally shut down. Limited money, fewer volunteers, and liability problems with the rope tow eventually brought about its demise.

Today, the warming hut is still in place and used in the summer and winter by county groups. The lower half of the “big tow” ski run is popular with sledders in the winter if there is enough snow to cover the sagebrush and boulders.