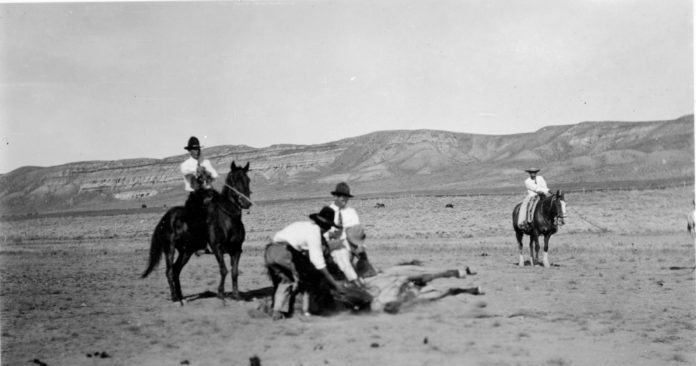 As summer marches along, the weekly Friday night rodeos in Dubois are in full swing. Much like the contemporary event, the historic rodeos in Dubois were well attended and anxiously anticipated. One of the first fully organized Dubois rodeos took place in 1921. Prior to that, rodeos were not formalized, public events as much as they were local ranchers gathering to watch young cowboys demonstrate their skills on the backs of bucking broncos.

The 1921 Dubois Rodeo was a celebratory event to commemorate the opening of Togwotee Pass and the southern entrance to Yellowstone. The rodeo also included events like calf-roping, bull-dogging, and wild horse racing. The next big rodeo event in Dubois was held in August of 1929 and a $200 prize was given to the first-place winner of the bucking horse contest! The rodeo expanded its events to also include the Half-Mile Dude and Dudine Race, the Half-Mile Cowboy Free-For-All, a novelty race, potato race, relay race, Indian race, and old clothes race*.

By 1931 the two-day rodeo show was being held the first weekend of August, following Cheyenne Frontier Days, and the town swelled past capacity with spectators and participants from all over the state, many of whom set up camp along the Wind River and Horse Creek. Notable performers like Chester Byers, who was once considered the greatest roper in the world, performed at the 1931 Dubois Rodeo. A tie-hacking contest was added in 1933 and tie-hacks from the Big Warm Springs Creek tie-camp would compete alongside cowboys and dudes who felt they could handle a broad-ax as well as a tie-hack! The Dubois Rodeo only grew in popularity and was once even billed as the “10th Best Rodeo in the World”.

World War II greatly impacted the rodeos, and after the war participation in the event was never the same. The old Dubois rodeo arena drew its last full crowd sometime in 1950 and shortly thereafter the land was sold, and the grandstand was torn down. Scattered rodeos were organized after that, and some were more successful than others. Mary Allison, in Dubois Area History, wrote that the loss of the rodeo meant Dubois lost some of its heritage and glamour, but today’s rodeos are only proving that not everything has been lost forever.

August 15th, 10 am at the Dubois Museum “Historic Cemetery Trek”

August 18th, 9-4 at the Dubois Museum “A Day on the East Fork with John Finley”

August 29th, 2-4 at the Riverton Museum “Treasure Hunt: How to use a Map and Compass”