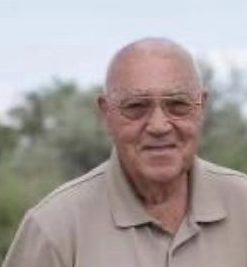 James Hubble passed away at home on January 30,2022 at the age of 82, after a long battle of multiple health issues.

Jim was born in Greeley, CO to George and Mildred Hubble.  He graduated from Grover High School in Grover, CO in 1958.  Jim married his high school sweetheart, Mavis Hall, and they were married for 63 years.  He started work as an oiler for the operating engineers union and worked on a large crane under his Uncle Willard who operated putting in Missile Silos in Eastern Colorado.  After his son Devin was born, he moved his family back to Grover and was a foreman on a cattle ranch.  Jim later moved his family to Ft. Collins, CO and went into banking, and was the Vice President at 1st National Bank.  He graduated from the University of CO School of Banking in Boulder, CO.  Jim later took a position as a Vice President at the 1st National Bank in Lander, Wy where he lived for the remainder of his life.

Jim was always good at whatever he wanted to do, from selling Real Estate, being a journeyman plumber, a finishing carpenter, and an electrical apprentice, along with his love for hunting, fishing, and woodworking. Jim decided to coach the Senior Babe Ruth Baseball team 16-18 years olds in Lander, which he loved since he was an avid sportsman in High School. They won 2 State Championships, and went to two National Babe Ruth Tournaments.   He also worked for several years as a sign technician for Wyoming Game and Fish making metal and wooden signs for the State and you can still see his work around town and the State.

Upon retirement, Jim and his wife followed their dreams and travelled all over the Western States for over 15 years, ending their travels in Yuma, AZ.