Cowboys win on the road against Fresno State 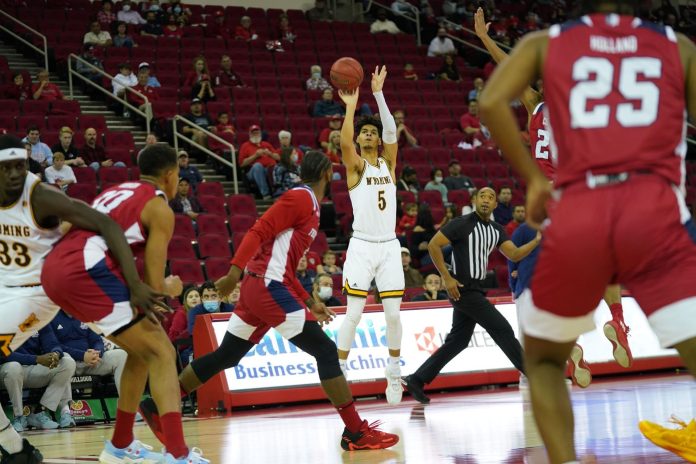 FRESNO, Calif. (Feb. 6, 2022) – The Cowboy defense and play on the glass lifted the Pokes to a 61-59 win over Fresno State on Sunday in the Save Mart Center in Fresno, Calif. The Pokes move to 19-3 overall and 8-1 in the conference for the best start in the MW since the 2001-02 season. The Pokes held a commanding lead on the glass on the night on their way to the victory winning the boards 46-28.

“We knew what kind of effort and toughness was needed,” UW head coach Jeff Linder said. “Fresno State on the road is a quad one win and we had to meet their toughness. We are going to have a time and place for others to step up and they did tonight.”

Wyoming was led by Hunter Maldonado with 21 points on the night. He also added eight rebounds and six assists. Graham Ike added 14 points and eight rebounds. Brendan Wenzel added 12 points on the night with a trio of threes to lead the Pokes. Wenzel added seven rebounds tying a career high. Drake Jeffries added nine rebounds to lead the Pokes, as four players had eight or more rebounds.

The Pokes held Fresno State to 39 percent from the field, as Wyoming shot 40 percent. Wyoming recorded 12 points off second chances on 14 offensive rebounds. The Pokes held the Bulldogs to only four three pointers with two coming late in the game.

After the Bulldogs opened the contest with an early 3-0 lead, the Pokes went on 7-0 over two minutes to take a 7-3 lead with 16 minutes left in the half. Ike led the run along with a three pointer from Brendan Wenzel. The Bulldogs tied the contest, but Maldonado hit back-to-back buckets for 11-7 lead for the Pokes with 12:42 left in the opening frame.

Fresno State would battle to take a 16-15 lead with just under eight minutes left in the first frame, but Drake Jeffries knocked down a three pointer the following trip down the floor to halt the 5-0 run for the Bulldogs. Hunter Thompson would give the Pokes a five-point lead with a three pointer for a 23-18 with a few ticks under five minutes left in the first stanza.

Wenzel added his second triple of the game for a 28-22 lead for the Pokes with 90 seconds left In the half. The Pokes held the Bulldogs to only two points in the final 2:44 to take a 28-24 lead into the half.

After Isaiah Hill opened the second half with a three-pointer, Graham Ike hit a jumper and a pair of freebies to make it a 32-27 contest two minutes into the half. Maldonado pushed the contest to seven points the following trip down the hardwood hitting a spinning jumper.

Thompson would add his second three-pointer of the game to give the Pokes a 40-32 lead with 12:19 left in the contest. Junior Ballard made it a four-point game at 40-36 exactly halfway through the half. Hill added a pair of buckets and made it a two-point game at 42-40 with 8:30 left.

Fresno State would continue to battle pulling within two once again, but a Wenzel three-pointer from the corner made it a 47-42 contest with 6:25 remaining. It got Wenzel to 11 points for his fifth game in double figures this season.

Maldonado would grab an offensive rebound and add a bucket to push the lead to seven points at 49-42 and later pushed it back to seven on a pass to Ike for a 51-44 game with 3:57 remaining. Ike pushed the lead to nine points at 53-44 with 3:19 left. He missed the and-one opportunity, as Fresno State added a bucket seconds later.

Maldonado added a pair of free throws, but Fresno State hit three of their own and made it a 57-55 game for the Pokes with 23 seconds remaining. Wenzel and Jeffries add free throws for 59-55 game, but Hill rushed to the basket and added a bucket for a 59-57 game with six seconds left.

Jeffries added a pair of free throws with 4.9 seconds left for a 61-57 game and a late second shot by Fresno State made it a 61-59 game for the Pokes.

The Bulldogs were led Hill with 25 points.  Orlando Robinson added a double-double with 11 points and 10 rebounds.

Wyoming returns home taking on Utah State in the Arena-Auditorium on Tuesday evening at 7 p.m.

The Pokes return home with the Bronze Boot

Cowboys begin the season with a big win over Colorado Christian