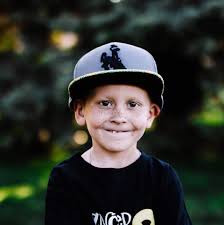 Carson Crofts, a Riverton boy, passed away February 19, 2018. He was 9-years-old and had been fighting Neuroblastoma.

Thanks to his story, in 2017, a group of Fremont County would-be rivals, came together to host a middle school dance with both Lander Middle School and Riverton Middle School students as a fundraiser to help with his medical bills.

Carson spent a considerable time at a children’s hospital in Denver while receiving treatment for his Neuroblastoma. An avid sports fan, he was excited when players from the Colorado Rockies baseball team showed up at the hospital to visit the patients.

One of the players that Carson met was Rockies catcher, Tony Wolters. The two apparently hit it off as Wolters became one of Crofts favorite players.

On Wednesday night, the AT&T Sports Net television broadcast crew did a story about Carson and specifically Tony’s interaction with him. Reporter Taylor McGregor explained that a few days ago, she was given a #CarsonStrong wrist band from Riverton man, Kyren Higgs. Higgs had asked her to give it to Wolters and let him know that he had passed away.

The message and wrist band were delivered and Wolters proudly displayed the wrist band on his locker. McGregor described Wolters as “emotional” after she relayed the message.

The video was broadcast, and is property of AT&T Sports Network Rocky Mountain.

As a side note, the Rockies went on to beat the Arizona Diamondbacks 19-2 Wednesday night and Tony Wolters had a triple.