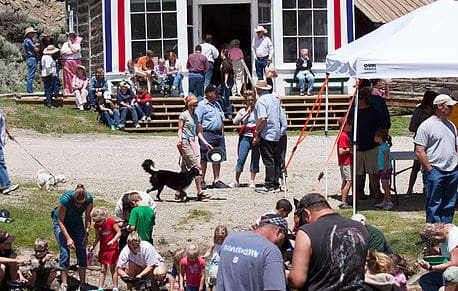 This years gold rush days will be a special celebration of South Pass City’s 150 year heritage. Vintage Base Ball will return with Hudson Defending their 2017 Championship against South Pass City, Lander and Riverton.

Stage coach rides, Pony Express rides, Pack Mule Demonstrations, Faro players, and Immigrant Trail Re-enactors as well as Gold Panning, home baked goods, and musical entertainments along the street. The Carissa Mine will be in full operations both days from 12 to 5 pm as well as the mining demonstration on the Flood and Hindle Trail.

As a special feature to commemorate the anniversary the site will host a concert with Chancey Williams & the Younger Brothers Band on the evening of July 7th, followed by a display of fireworks like no other in the State of Wyoming! And of course the always popular anvil blasting!

The event is sponsored by the Friends of South Pass and the 150 @150 group of sponsors.
Learn more here.