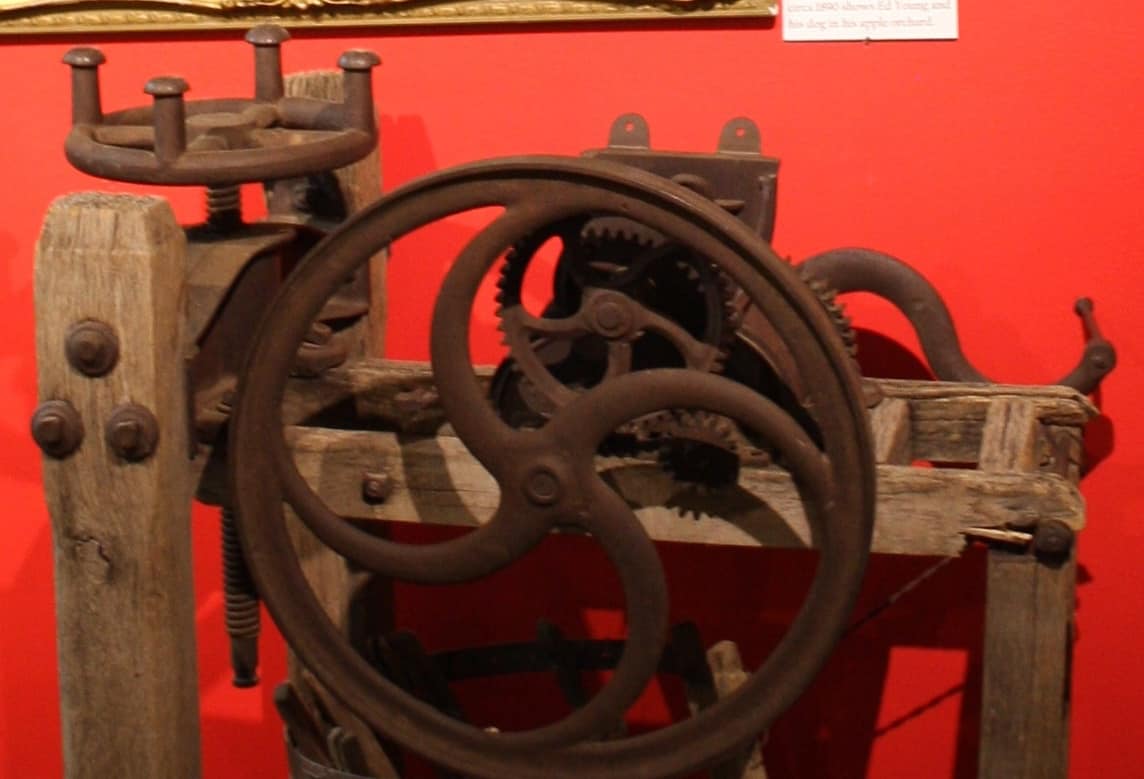 Agriculture in the Lander Valley grew out of necessity for food. In the early 1890’s a handful of early pioneers, who had already settled in the valley, knew the miners in the gold fields of South Pass needed a supply of food. It was a logical leap from growing food for you and your family to selling it for a profit.

Lander was an isolated community. It was 150 miles from the nearest railroad so all goods had to be hauled in by freight wagons.  Pioneers had to be self-reliant and having their own livestock, gardens and orchards was a big step toward achieving their independence. They planted vegetables gardens and fruit bushes and the ever popular apple tree.

The Lander Pioneer Museum just opened a new display on the apple industry in the valley and its importance to the early pioneers. Featuring photos and artifacts from apple growers, the main attraction is Ed Young’s cider press. Young was a farmer who settled in the Red Canyon area and created huge apple orchards. Pressing the fruit into cider was an important way to preserve apples for use after they ripened.

The climate in the valley was, for the most part, favorable for the production of crops. The town and surrounding area is nestled up against the Wind River Mountains and is protected from harsh winds. Not to say that there were some years when growers experienced weather related problems such as a harsh winter or early spring and fall freezes. Another advantage of the area was the availability of plenty of water. The Lander Valley gained a reputation for its abundance of garden and fruit produce. A fresh juicy apple was popular with residents. The fruit could be used to make apple cider, jellies, applesauce, pies, or eaten raw. Local residents sold their produce and proudly competed in the county and State fairs.

The stand-out producer of apples was Ed Young. He was as dedicated as one could be when it came to developing his apple orchard and cultivating new hardy varieties of apple trees. By 1889 his trees were bearing fruit and by 1894 he was in full production with about 100 fruit bearing trees. It was Ed Young’s good fortunate that he homesteaded in a beautiful area in Red Canyon that had fertile soil and favorable climate.  His apple orchard became known throughout Wyoming.  People would visit his orchard and he would serve them a glass of his tasty apple cider. Lander citizens and merchants looked forward to seeing Ed Young coming across the bridge with a wagon full of his tasty apples. He gained a reputation as one of Wyoming’s leading horticulturists. His prolific production of apples led to Lander being called the Apple City.   He was a leader in the apple growing industry and encouraged others in the community to plant apple trees.

During this same period of time, the U. S. Department of Agriculture Act gave support to communities that wanted to setup facilities to undertake research on what types of local crops would not only survive but thrive. The Lander State Experimental Fruit Farm went into business the late spring-early summer of 1891. The results of the findings were then made public to anyone who wanted the information.

August 8th, 5:30pm at the Riverton Museum, “Digging Up Dubois”

August 9th, 7pm at the Pioneer Museum, “How to Care for Old Photographs”