Wyoming rolls past UNLV Friday thanks to strong rushing attack

“We talked at halftime about our execution and UNLV good players and we had to make them work hard,” UW head coachCraig Bohl. “We reestablished the momentum on the fourth down play and went down and scored and that got thing rolling for us. Our point of attack on the defensive and offensive line were well up to par.”

SeniorTrey Smithrushed for a career-high 156 yards with one touchdown. He recorded 6.8 yards per carry for the game with a long of 28 yards. JuniorXazavian Valladayadded 94 yards and a touchdown from 78 yards a career high. He left the game in the first quarter.

“Our offensive line did a great job of opening up holes,” Bohl said. “Trey (Smith) kept his feet moving and made some great runs, it was very heartwarming to see him out there and execute at such a high level.”

Freshman quarterbackLevi Williamshad three rushing touchdowns for the most in a game by a Cowboy since Brian Hill had three against New Mexico on Nov. 26, 2016. He rushed for 44 yards and passed for 99 yards.
The Wyoming offense averaged seven yards per play and held onto the ball for over 35 minutes. Wyoming finished the game with 498 yards of total offense for a season-high.

The Pokes defense was stingy all night allowing only 290 yards. Wyoming recorded two turnovers and turned those into points. Wyoming recorded five sacks in the contest. Junior linebackerChad Mumahad three sacks in the game for the most in a contest sinceCarl Grandersonhad three against Boise State in 2017. Senior defensive endGarrett Crallmade his return and added and sack and two tackles for loss.

“To have two veterans back out there inGarrett CrallandLogan Harrisit adds stability and leadership,” Bohl said. “Their presence sent steadiness to some of our younger players.”

“We knew that UNLV had some weakness and the blitzes our coaches dialed up really allowed Chad (Muma) to make plays. “It is encouraging to see the development from our coaches with our defensive line.”

The Cowboys wasted little time getting on the board with Valladay finding paydirt on a 78-yard scamper for the longest rush of the season for the Cowboys and longest of his career. The rush came on the second play of the contest for the earliest score for the Pokes this season.

The Pokes added to their lead with a 36-yard field goal byJohn Hoylandwith 6:52 left in the opening frame. It capped a 14-play 54 yard drive for the Brown and Gold. The drive was highlighted by a rush of 13 and 11 yards from senior running backTrey Smith.

Wyoming made it 17-0 contest with eight minutes remaining in the second quarter on a 15-yard scamper from Williams. It was a part of a nine-play, 75 yard drive that spanned four minutes. Williams rushed for 27 yards on the drive and hooked up with senior wide receiverAyden Eberhardton a 27-yard pass to highlight the third scoring drive for the Cowboys.

The Rebels got on the board in the final seconds of the first half on a two-yard touchdown run by Max Gillam. UNLV drove 98-yards on the drive, as it reached Cowboy territory for the first with 45 seconds left in the half, as the score made it a 17-7 game at the half.

Wyoming stopped UNLV on fourth down to open the second half on a big stop from Gandy. The Pokes turned it around on their first play with an 18 yard rush from Smith for the Cowboys. UW kept it on the ground and made it a 24-7 game on a one-yard rush from Williams with 8:27 left in the third quarter.

The Cowboy defense made another big play this time freshman defensive endCameron Smithhopped on a fumble inside UNLV territory. Wyoming added to its lead with freshman fullbackParker Christensenwith a 21-yard catch that led to Williams third touchdown run of the day this time from one-yard out for a 31-7 advantage with 5:27 left in the third period.

Yet another turnover by UNLV this time an interception from senior safetyBraden Smithset up another score for the Pokes to build a 38-7 lead with 1:19 in the third quarter. The drive was highlighted byTrey Smithfinding the endzone on a 28-yard rush to record a career-high for rushing in a game.

Wyoming added to its lead in the fourth quarter on a 19-yard run fromBrett Brentonfor his first career touchdown to make it 45-7. UNLV added a touchdown late with the Pokes taking the contest 45-17.

UNLV was led by Max Gillam with 65 yards passing and 63 yards rushing. UNLV was led defensively by Bryce Jackson with nine tackles.

Wyoming returns to action next week once again playing in Las Vegas this time against New Mexico at 8:30 p.m. MT on CBS Sports Network. 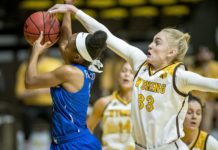 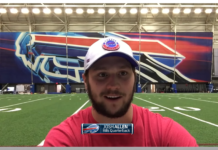 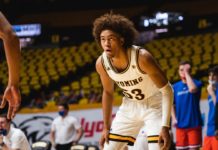