So far this winter, approximately 35 new collars have been deployed, bringing the total number of marked animals to over 80 within the state’s trophy game management area. Managers like to have at least 1-2 collared animals in each pack to monitor the changing distribution and derive an accurate count for the population. Regular aerial surveys are flown to keep tabs on the collared animals and their associated packs. 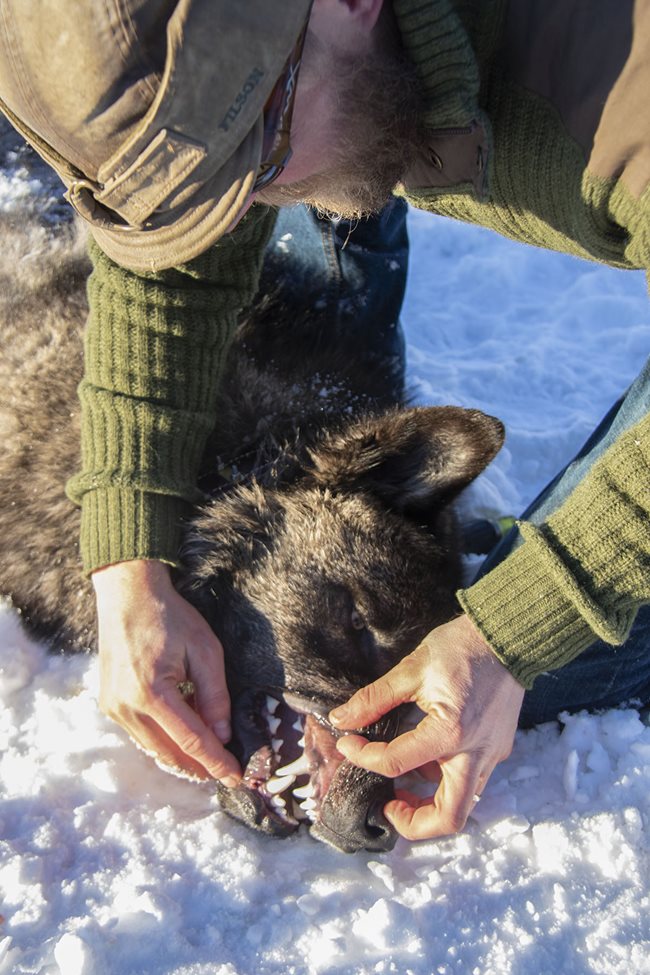 Wyoming Game and Fish Wolf Biologist Ken Mills examines the teeth of a wolf to determine its approximate age. The lack of tooth wear indictaed it to be a young wolf, estimated at 10 months old.

Most of the captures are handled in the field away from people by a contracted professional wildlife capture crew. The crew will typically net-gun the animals, collect blood and other biological samples, fit it with a GPS collar and release it on-site. The battery life will allow the GPS collar to record the animals’ travels for approximately 2-3 years. In addition, the Department’s Large Carnivore biologists also put on skis or snowshoes and follow-up on reported sitings to help gain accurate counts of wolves, as well as assist with the aerial captures each year.

To learn more about wolves in Wyoming visit the Wyoming Game and Fish website or click this link: https://wgfd.wyo.gov/Wildlife-in-Wyoming/More-Wildlife/Large-Carnivore/Wolves-in-Wyoming.