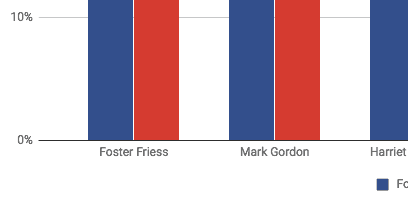 The state is buzzing with a recently published Trafalgar Group poll (below) showing that Foster Friess holds a narrow lead over the field in the GOP’s race for the Governor’s race. Facebook “follows” has shown similar data for weeks now (above), if you subscribe to the notion that “Follows” and “Likes” on Facebook equate to voter sentiment. While non-scientific, social media clout, as measured by engagement and “follows” is an indicator of interest and attention. While it may not translate directly, many organizations and individuals will use social platform measures (e.g., Facebook, Twitter, and Instagram) as indicators of relevance. So, for what it’s worth, we’ve compiled those Facebook “follows” by candidate for your review. By those measures, Foster should run away with this race.