(Lander, Wyo.) – A study is underway with thirty-one mule deer does in the Sweetwater Mule Deer Herd Unit and Wyoming Game and Fish Department biologists are beginning to learn about the habitats the deer are using.

Mule deer were captured and collared in March to track their spring migration from winter range to summer range. Twenty of those deer have migrated some distance from their winter range near the Sweetwater River. Most migrated 10-15 miles south to either Green or Crooks Mountains. The longest movement was nearly twenty miles to the south side of the Ferris Mountains. In comparison, some other recent deer collaring projects saw movements of 40 miles outside of Lander and 245 miles from the Red Desert to Idaho. 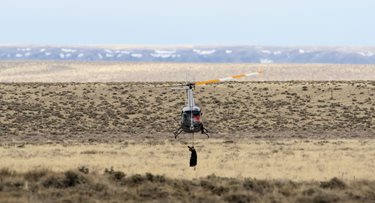 These deer were captured as part of the Wyoming Migration Initiative and the Game and Fish Lander/Green Mountain Mule Deer Initiative to track their movements, but also to better understand how they use the habitats in the area.  So far, these deer have moved to a wide range of habitats. Some have been aspen groves, pine forests, sagebrush taller than the tallest human, and sagebrush barely tall enough to hide a sage grouse, mixed sagebrush and forest in a somewhat savannah-like mix, and others moved to small streams on the mountains with lush riparian vegetation, and even others to shrubs in nearby uplands.  Some of the deer that “stayed home” on or very near their winter ranges are using alfalfa or grass hayfields and other lush riparian vegetation along the Sweetwater River and its tributaries.

As Game and Fish biologists assess habitat in these areas they are focusing on the collar locations to determine how mule deer are using the landscape and the condition of the habitat the deer are using. They will analyze how much deer forage on key plans like antelope bitterbrush, sagebrush, aspen, and riparian shrubs. 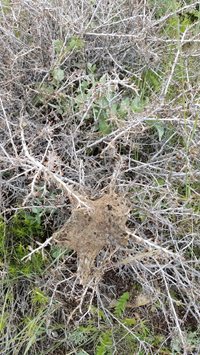 Lander Wildlife Biologist Stan Harter mentions that some of the habitat looks poor and says, “As we’ve been out in the Lander and Jeffrey City areas this spring and summer, we’ve noticed a large number of bitterbrush stands that appear to be nearly dead from infestations of tent caterpillars (above). We hope the plants are not actually dying, but we won’t know for sure until later this year or next. Also of concern in some areas is the large number of grasshoppers that seem to be having a big impact on rangeland grasses.”

Beyond habitat, biologists have found that when migrating, these deer are crossing HWY 287/789 very quickly, reducing their chances of vehicular collisions. However many of them are wintering on both sides of the highway and so during winter are much more prone to being hit by vehicles.

Biologists plan to capture and collar at least ten more mule deer does in the Sweetwater herd unit this fall or early winter, to fill in any gaps where data may be missing.