#Smiles: Lander Lobos knock it out of the park last night for the State Championship win

A series to share#smilesacross our community through the achievements of our local youth, brought to you by Rendezvous Dental.

This year will be one for books as many organizations adapt to COVID-19 preventative measures. The Babe Ruth Baseball Teams across Wyoming are no exception.

“Our players were mentally tough down the stretch and didn’t allow the pressure to be a detriment,” said one of their coaches Chris Babb. “Shannon and I were appreciative of their flexibility and their willingness to put the team before themselves.”

Later this week, the Lander Lobos Varisty and Junior Varisty Senior Babe Ruth Teams will head to Cheyenne and battle it out on the diamond for the state championship as well. For the first time, two separate tournaments for the varsity and junior varsity will happen simultaneously, Coach Mike Antonovich explained.

“We let the championship slip through last year,” Mike noted. “They are primed to go back and make amends for the title.” 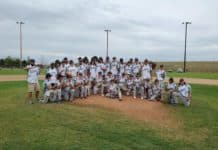