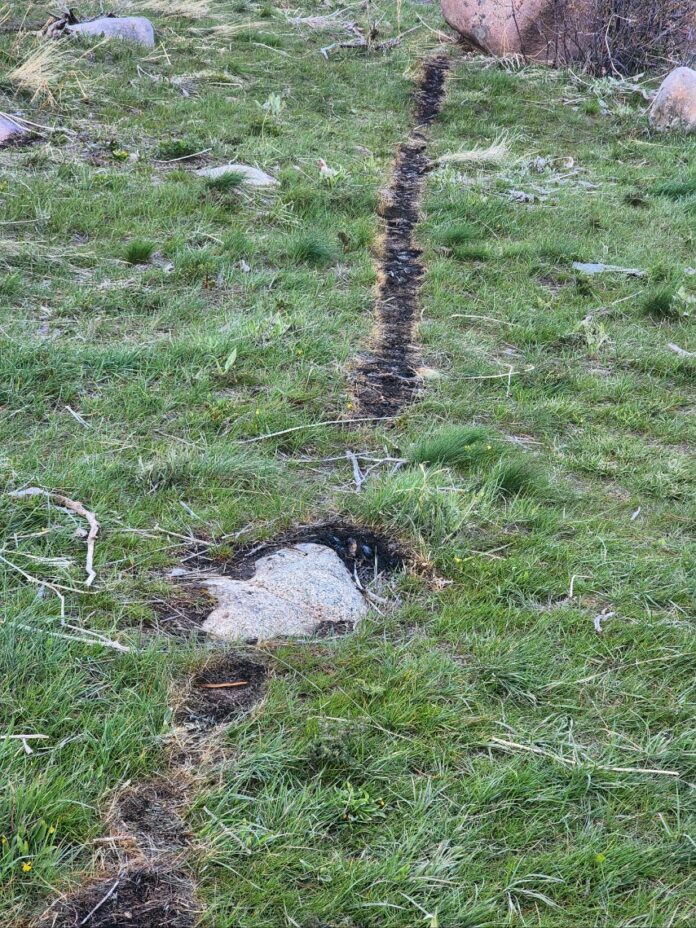 A heavy snow and wind event that blew through Sinks Canyon earlier this month appears to have knocked down a utility pole near Bruce’s picnic area.

The incident likely caused an electrical fire that traveled along the wires connecting several other poles in the area, retired meteorologist Dave Lipson said.

He believes the weather event that caused the damage occurred May 3-4, when up to 2 inches of snow-water equivalent fell in the area, loosening the soil that was “already somewhat saturated” around the utility pole.

“This was enough (to) enable a small to moderate amount of wind to knock the pole down,” Lipson said.

The broken pole has since been removed, but Lipson said evidence of the incident remains at the scene, including debris like a “busted insulator” and “splintered wood.”

Signs of the electrical fire that ensued are also visible, Lipson said, suggesting that the blaze likely followed the path of a telephone wire that runs along a series of utility poles near the Middle Fork Trail.

He pointed out that the wires of the utility pole directly adjacent to the pole that initially fell appear to have been “severed.”

Two poles later, he said the fire appears to have burned a crossbar that delivers electricity to some nearby cabins.

Part of the wire eventually fell to the ground, Lipson said, starting a small blaze along a strip of grass next to the trail, where a “black streak” was visible.

“You could see that the black line of burnt grass was aligned with where the wire would have been,” he said.

Lipson noted that the pole that fell down was “off the main grid” and “had actually not been in service for 10 years.”

“The other telephone poles still bring power to those cabins,” he said.

Peregrine falcons recovered from cliff outside of Lander