(Cheyenne, WY) — Sage grouse reproduction held steady in 2020 based on preliminary data from the wings of harvested chick and hen sage grouse. The wings are collected from hunters—primarily in central and southwest Wyoming—who voluntarily contribute sage grouse wings by dropping them off at designated collection points during the hunting season.

“It appears Wyoming’s sage grouse populations are flattening out at the trough of the cycle,” said Wyoming Game and Fish Department sage grouse/sagebrush biologist Leslie Schreiber. “A growing population needs at least 1.5 chicks/hen.”

“Hunting is an important component of sage grouse management in Wyoming and has not shown to have a negative impact on the population,” Schreiber said. “We appreciate hunters dropping off wings for our data collection.”

Good moisture in the spring and summer and quality habitat are the top two contributing factors of chick survival that ultimately raises populations. More moisture means chicks can nosh on a variety of high-protein insects in their first month of life with adequate habitat cover. As the bird grows, grass and forbs —like wildflowers—become another important food source. Older birds rely almost exclusively on sagebrush in their diet.

“Sage grouse are a sagebrush obligate species and could not survive without it,” Schreiber said.

A full analysis for 2020 bird populations will be available in the sage grouse job completion report, posted on the Game and Fish website in the spring. 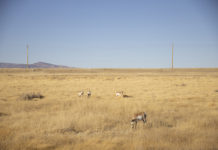 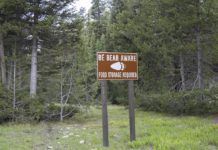 Game and Fish says bears are out and provides tips to... 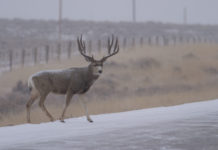 Plan released to reduce wildlife/vehicle collisions in the Dubois area