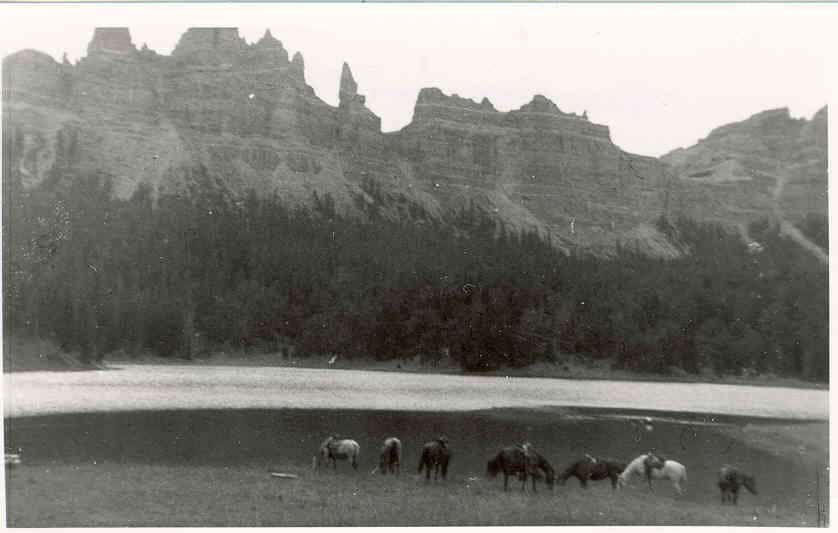 Andy Kissinger was among the first settlers in 1909 staying on his land that he settled all his life. Mr. Kissinger raised Percheron horses on the ranch, which he described as a ranch level as a floor, all hay land, surrounded by hills, with the DuNoir flowing through the center of the meadow. This ranch was near the head of the DuNoir Valley northwest of Dubois, Wyoming.

Not only was Andy an avid rancher but he also served as the Justice of the Peace for the Upper Wind River Valley. He was an interesting character, like most Dubois people, for example when he married Harve Burlingham and Amy Henton he asked, “Harve, do you love Amy?” Harve answered yes. “Amy, do you love Harve?” She said yes. The Andy said, “By golly, by jacks, by Jesus Christ – Your married!”

Kissinger and Grant Nipper operated a sawmill in 1913 located about 3 miles south of Dubois. This sawmill furnished most of the logs for buildings in the area.

The following story was recorded by “Army” Adams beginning June 6, 1901 when he left Montrose, Colorado heading to Dubois, Wyoming. Mark and Sandy Thompson shared this story with Mary Allison in the Dubois Area History book.

“On the 18th of September 1901, I got a few provisions (prices soaring toward the sun), camped 12 miles north of Dubois. Sack flour, sheep shearer, wagon help took flour. The next day change our course again. This time for Gray Bull (Greybull, Wyoming). Meet A. Kissinger, he tell us to stop with him tonight.”

“September 20: Then induces us to stop over today.”

“September 21: As I decide to work a month for Andy, Jack take Dick, pack saddle, and bell and hatchet of mine and goes upriver to hunt and trap until 20th when he says he’ll be down.”

“September 22: Andy and I try to split some green timber-no split- so he decides to give me other work till it will.”

“September 23: Start to work and work steady till October 28, then go to Dubois, stay one night and come back.”

“September 29: I hunted today, saw fresh signs of five or six elk. Got a shot at a stray one, but missed.”

“November 2: Hunted but no luck. Horses – cattle- Jack showed up once. Disappeared again and has not been heard of since my articles with him yet.”

“Wednesday, November 13: Andy Kissinger (boss) and I went across continental divide on a hunt. Altogether saw 300 or more elk and deer. I killed on big bull elk, he did likewise. Got home November 22.”

“Andy went to Dubois the 22 saying he would be back in four days.”

Adams worked for Kissinger until fall of 1902 and according to his figures he made $56 dollars for work done. Later he wrote he had $87.75 with all accounts squared. His wife became ill and he returned to Montrose, Colorado that fall.

Perhaps you too have heard of Andy Kissinger, the early day homesteader/rancher in the DuNoir Valley. This is part of the story of the man that Kissinger Lakes at the head of the DuNoir Valley is named after. This information is from the classic book Dubois Area History by Mary Allsion.

September 8th, 10am at the Pioneer Museum, “Hudson Coal Mine Trek”