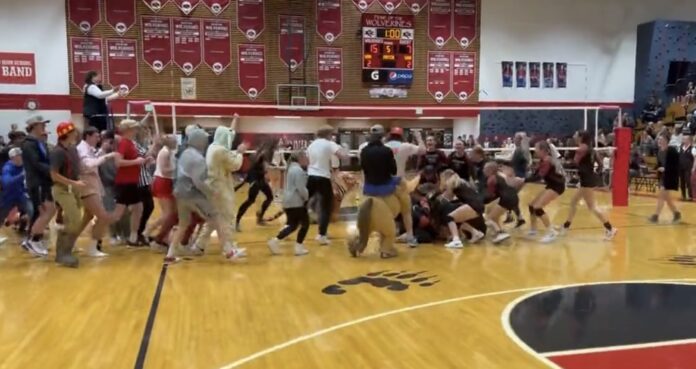 (Fremont County, WY) – The game is sent to the fifth set with the winner of the match qualifies for the state tournament in a week while the losers season comes to an end. That was the story of Saturday’s match between the Lady Wolverines and the Rock Springs Lady Tigers.

Riverton won set one 25-8 in the elimination match. Rock Springs took the next two sets with score of 25-22 and 25-12. In a must win set fourth set, The Lady Wolverines defeated the Rock Springs 25-17.

The Lady Wolverines would start set five down 6-2. With a timeout called by head coach Kim Davis, the team regroups and proceeded to go on a big run. Each score Riverton made, the crowd erupt and the closer they go the louder it became. Riverton will go on a huge run to win the match against Rock Springs 15-7.

Check out the winning point in set five below.

With the win, the Lady Wolverines now have qualified for state tournament this week. They will play Laramie in the first round Thursday at 4:30 p.m. All matches will take place at the Ford Wyoming Center.