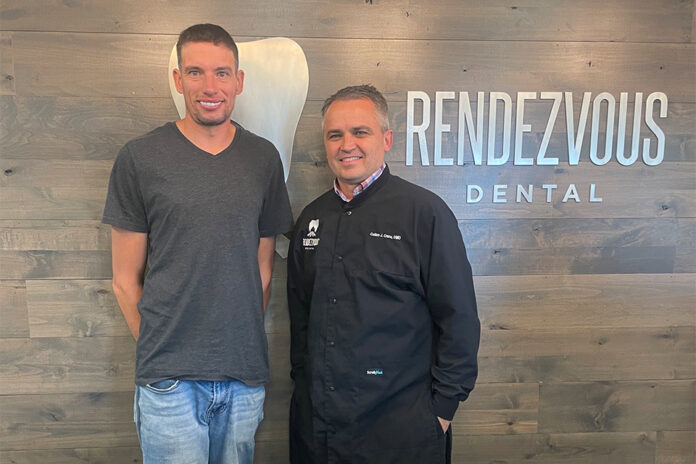 They say a smile is worth a thousand words. It’s true. The gesture of smiling can convey more to others than words alone can. So what do you do if you’re so self-conscious of your teeth that you feel you can’t smile? It can affect confidence and self-esteem. This can be a huge obstacle in someone’s life.

Neal Callahan didn’t smile much in the past. He had always had bad teeth. It was genetics. It always had a somewhat negative effect on his life, but after he moved from Alaska to Montana, his sister said it started to make more of an impact.

“Neal had just gotten out of a relationship and his life was kind of stalling,” said McKenzie Samuelson, Neal’s sister. “We talked about our lives, where we were going to go, and what we needed to do. I really felt like his teeth in general and the lack of confidence that it brought with it was holding him back.”

They both reflected on the road that lead to this point, “We came from a small town and we had a ton of friends but there was still some insecurity, and also he’s really tall, right? So your eyes look directly at his teeth. When you’re looking up at someone, that’s what you’re seeing. I feel like it really held him back.”

This all prompted the conversation about possibly getting his teeth fixed. There were many factors involved with the number one thing being finances. A new smile is expensive. Neal began researching dentists in Costa Rica. He had heard that many people have found a cheaper option in another country and still had great results. McKenzie didn’t like the thought of him having to go to a completely different country for dental work.

“I didn’t like the fact that he would be in another country by himself getting work done. He would be alone and there would be no guarantee on the work once he was back in the US.” McKenzie decided that the only way to stop him from going to Costa Rica was to find a better option close to home. She began looking at dentists in Fremont County, specifically Riverton. Her plan was to find a dentist in Riverton and then he would have to visit home to get the work done. It was a win-win situation.

At first, she had no luck. She really wanted to find a dentist that was not only talented and affordable but also someone Neal would be comfortable with. Financing was another issue. Neal had no insurance so they needed a dentist that was willing to finance it or willing to give them a plan affordable enough that they could finance elsewhere. They needed a set-in-stone, doable plan. McKenzie’s son had seen Dr. Crane and she had liked him. She decided to make an appointment at Rendezvous Dental for herself and this was the turning point.

“So I made an appointment for myself and when I was done I was like okay, actually this is more of an interview. I told him about my brother and I started crying, which I don’t really cry that often. I didn’t realize how much I had built up inside me until that moment,” stated McKenzie. “I was putting all my eggs into this basket. I knew Dr. Crane was it. I knew that if I could just get Neal here, then we could do it.”

McKenzie talked Neal into coming to Rendezvous Dental for a cleaning so he could meet Dr. Crane. They took all the X-rays and showed them everything he needed. They discussed financing and decided it was too much money to finance through the office. This was a bit of a roadblock, but when asked what Dr. Crane could do for them, he delivered.

They laid out the X-rays and said, “This is what you need done and this is the price we can give you.” Neal and McKenzie were both pleased with the quote. It was at least $15,000 less than they were expecting. Dr. Crane also promised that the price would never go up even if they were to find more problems. And his work was guaranteed.

This was promising but Neal still had to pay down some debts and get some finances in order before he could commit. A few other roadblocks delayed the process. Neal hit a deer twice with his car and was feeling a bit defeated, but Dr. Crane kept checking on him to see how he could help. Finally, the finances were there and the first appointment was made!

Since Neal lived in Montana, Dr. Crane worked well with him to get as much done as possible in each appointment. If there was a problem, Dr. Crane got him right back in before he left town.

“He comes in and he’s very, very friendly. When you’re doing dental procedures, sometimes things don’t go perfectly. Sometimes things hurt. Sometimes things are difficult. And he never complained about anything. Everybody in the office talks about how nice and sweet and how much they love when Neal comes in. He’s actually made it very, very easy to do the work that we’ve done.”

His sister says the smile makeover has given Neal more of a voice and a big boost of confidence. When I asked Neal how it changed his life, he said, “I work in landscaping and I need the competency of talking with people about my work. I had to go deal with homeowners and talk with people. This gave me the confidence to confidently talk with them. It’s helped me make many more connections than before.”

“It’s fun to see. My favorite thing by far is when someone wants to improve their smile. Especially with the technology and new materials. We try to stay current on all of that. With cutting-edge technology and materials, we can really turn a smile around. The way that people see themselves, the way they talk, the way they look, and the way they act. It’s fun to see that change, from where Neal started to his new improved smile,” Dr. Crane elaborated on the process. “Everybody really does love Neal. I really appreciate my relationship with him which helped get him to this point. That relationship is one of the main reasons I went into dentistry. Building those long-term relationships with my patients. It gets to the point where it almost feels like they are family.”

Dr. Crane believes you have to treat your patients like friends and family. Because if your friend called and said, I have a toothache, you would do everything in your power to help them. This is how the entire staff at Rendezvous Dental treats any patient they see. They will go out of their way to make sure you are comfortable and get the best care possible.

Neal and McKenzie both recommend Rendezvous Dental highly to others. From the front desk to the people in the back, this is the best dental care out there!

Looking for a new smile or just great overall dental services? Call Rendezvous Dental at (307) 856-2778 or visit the website to schedule an appointment today!