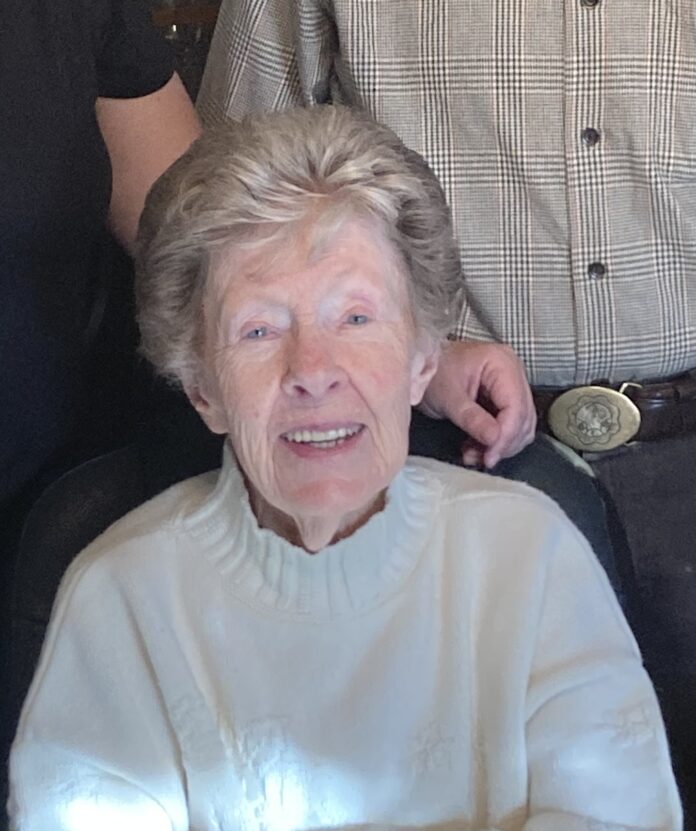 Mary Jane King, 97, passed away peacefully at her home in Lander on Nov. 17, 2022. Mary Jane was born May 24, 1925, to Charles A. and Ethel (Gates) McKethen of Thermopolis. At the time of her birth, her parents owned a small hotel and she attributed her social nature and love of people to growing up there.

Mary Jane attended local Thermopolis schools and was a 1943 graduate of Hot Springs County High School. She was a gifted musician who participated in band and choir, playing piano, accordion and clarinet. In high school dance band she met the love of her life, trombonist Jack King, who had moved to Thermopolis with his family from the nearby coal mining community of Gebo. Mary Jane and Jack would become high school sweethearts and, ultimately, life companions. They married soon after their high school graduation, just before Jack’s induction into the Army Air Corps at the beginning of WWII.

Mary Jane and Jack’s first child, Jacque, was born while Jack was in the service, and Mary Jane was able to complete a year of study at McMurray College in Jacksonville, IL. After the war, Jack and Mary Jane moved to Powell to attend the newly established Northwest Community College. Both were recipients of the first Associate Degrees offered by the college. In 1947, the family moved to Greeley, CO, where Jack earned a BA at Colorado State College of Education, and their son, Charles A. (Chip) was born.

The family returned to Thermopolis in 1950 where Jack began his first job as a teacher and coach. In 1952, Jack was hired as head basketball coach at Fremont County Vocational High School and the King’s moved south to Lander. Son David and daughter Tierney were born in Lander.

Mary Jane was a committed mother who devoted her time and talents to supporting all her kids’ pursuits, from Girl Scouts to sports, from music to 4H. Her skill at sight reading music kept her in demand as an accompanist and the King house was often filled with joyful noise. In later years, two more generations of kids would have the benefit of Mary Jane’s nurture and the house at 700 South 5th would be known as “Jack and Nana’s.”

Mary Jane was a Past Honored Queen of Job’s Daughters Bethel 7, Thermopolis, a past member of the Order of Eastern Star and Daughters of the Nile, and a charter member of Chapter BB, PEO.

Mary Jane was preceded in death by her parents and her son Chip. She is survived by Jack, her husband of 79 years; her children Jacque Shaw (Ron), David King (Carol) and Tierney Franz (Jim); seven grandchildren and 11 great-grandchildren. Her beloved dog, Toby, crossed the Rainbow Bridge a few hours behind her.

There will be no funeral services at this time. Memorials may be made to: Lander Pet Connection, 120 Chittim Road, Lander WY, www.landerpets.org