(Lander, Wyo.) – A new trophy fishing opportunity exists near Lander.  On July 3, Game and Fish fisheries crews captured high numbers of large lake trout in Louis Lake, which lies along the Loop Road in the Shoshone National Forest near Lander.  Ninety-two percent of the captured lake trout were > 4 lbs, and 24% were > 10 lbs.  The recent increase in lake trout size was likely caused by kokanee salmon stocking, which began in 2014.  Kokanee are stocked to provide additional sport fishing opportunity, but are also a preferred food item for lake trout. 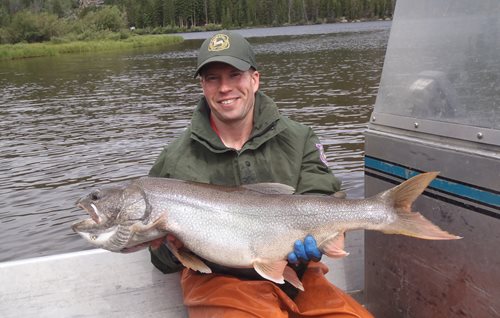 The high numbers of kokanee stocked in Louis Lake (between 10,000 and 30,000 annually from 2014 – 2017) created a new food source, and likely increased lake trout growth rates over the past four years.  A downside to the increase in large lake trout may be a decrease in splake (a hybrid between a male brook trout and a female lake trout), which have been stocked since the late-1970s and are popular with Lander-area anglers.  The splake catch rate in gill nets decreased by 80% from 2015 to 2018.  The effects of lake trout predation on stocked kokanee are still unknown, and will be evaluated further this September.

Most of the trophy-sized lake trout were captured in the northeast portion of Louis Lake, near the beach and outlet stream.  Others were captured near the inlet stream in the southwest area of the lake.  Boat anglers have the most success at catching lake trout, as the species prefers deeper water.  Shore anglers may have better success fishing the north shore of Louis Lake (because the shoreline drops off quickly to deeper depths), or at night when lake trout move to shallower water to feed.