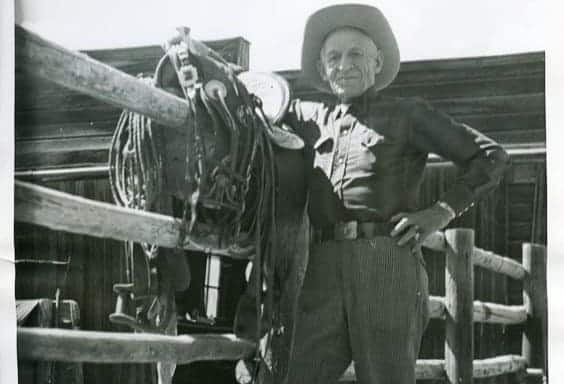 Steamboat was perhaps the most famous bucking bronc in the history of rodeo. He was born near Chugwater in 1896. Steamboat was a strong, athletic black gelding steed whose jumps and gyrations made him almost impossible to ride. He was a ferocious fighter even as a colt which led to his name. When cowboys were trying to corral the young colt, Steamboat broke his own nose. The injury did not heal right “and every time he got his windup, he would huff and chug like a steamboat.”

Steamboat was owned by the Swan Land and Cattle Company in 1900 and then was sold to local ranchers, John Coble and Sam Moore before being purchased by Charles Burton Irwin, a rodeo entrepreneur. Irwin was a big promoter of the Cheyenne Frontier Days at the beginning of the 20th century and owner of a wild west show. Steamboat went into the rodeo arena in 1903, and the crowds soon noticed the mighty bronc. He soon became a crowd-pleaser and people would come just to see bronc riders try their turn on the bronc. Few riders succeeded in staying on Steamboat’s back. One rider that did ride Steamboat was Clayton Danks. He successfully rode Steamboat in Denver in 1906 and won $500 in gold and Danks rode Steamboat again in Cheyenne in 1907 during Frontier Days.

According to his owners, Steamboat was docile and cooperative with his handlers until someone tried to saddle him. Then the demon came out in this horse. He would jump and twist his body and do anything necessary to launch the would-be rider into the dust.

Steamboat’s life ended while on tour in Salt Lake City when he was injured, perhaps by barbed wire; the wound became infected. Old Steamboat had to be put down in 1914. An image of Steamboat was used to create the University of Wyoming logo on their athletic uniforms.

According to Candy Moulton, “Steamboat epitomized the spirit of Wyoming—strong independent and fiery. I really think he does represent the whole heart, and that we’re still one of those states that are considered rather wild.”

Steamboat was inducted into the Professional Rodeo Hall of Fame and the National Cowboy Hall of Fame. Steamboat represents Wyoming in the commemorative state quarter. Clayton Danks was one of the few riders who managed to stay on Steamboat’s back. He was named Champion Bronc Buster of the World at Cheyenne Frontier Days in 1907 when he rode Steamboat. He was awarded a fancy saddle for his trophy. In 1904, Danks was named World Champion Roper. Danks became Fremont County Sheriff from 1936 to 1950.

Henry Jackson, a well know artist originally from Lost Cabin fashioned a bronze sculpture of Danks and Steamboat. He titled his piece Two Champs. One of the bronzes was given to Queen Elizabeth and Prince Phillip by President Ford during a state visit in 1976 during the bicentennial. The sculpture sits on a base of Wyoming jade.

Fremont County Museums will reopen to the public Tuesday, May 26th. We will resume our regularly scheduled hours Monday-Saturday from 9-5.

July 11th, 9 am at the Riverton Museum, “Midvale Irrigation Trek”

July 18th, 9 am at the Riverton Museum “Bates Battlefield Trek”

View all
Add an Event

Change Location
To find awesome listings near you!