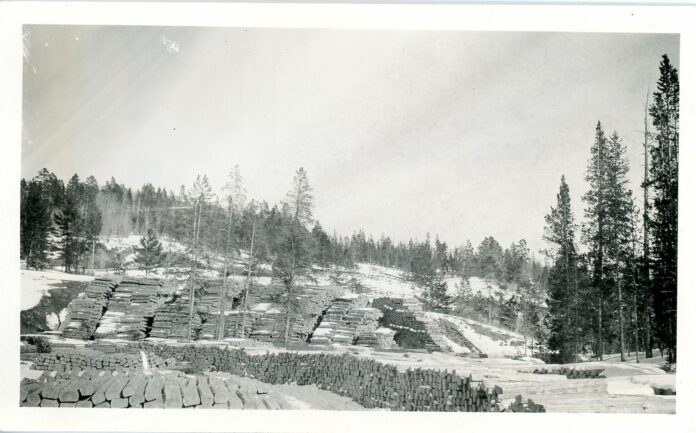 Times may not be all that different today from a hundred years ago regarding timber harvesting. The odds are if you walk through a timber sale area today you will see some trees that are marked and some that are not, the ground is torn up from the machinery used to harvest the timber and nearby is usually a log deck waiting to be hauled out to its next point to becoming something. That something may be wood pellets or firewood to heat our house, rough cut or finished lumber, perhaps plywood, the list can go on and on. A hundred years ago a timber sale looked very similar.

How did the tie hacks know what trees to cut to make the ties? These ties that were cut and used for the railroad were harvested from the National Forest through timber sales. Before the cutting began, the timber sales were plotted, and trees were marked much like they are today. Like the tie hacks that often lived in cabins near their strip, so did Forest Service personnel. The Forest Service personnel were the ones that set up the timber sales by marking trees on a “selection” basis. This selection removed about two-thirds of the stand. The trees that were marked, with the US, were used. This target group of trees included spike tops, forked trees, insect or diseased, badly scarred by porcupines or fire scars. They added enough of the sound trees to bring the total stand to 60-65% being harvested. This was the general guide.

Once the timber sale was ready to go the woods boss, likely Martin Olsen would designate which tie hack got which area to work. These were known as strips and a strip was 150 feet wide and generally ran from ridge top to creek bottom.

The Forest Service employees then had to count the number of ties harvested and do final inspections on the timber sales. They made sure all marked trees were removed, no unmarked trees were removed, all possible ties were cut from the trees, the trees left standing weren’t unnecessarily damaged, and stumps were cut low. Most of the time these were not issues, however, once in a while they were.  When issues did arise, and something was not what it should have been the Forest Service would issue a penalty scale to the company. If this happened more than a couple of times the tie hack responsible was run off in a hurry by the company.

The Wind River Cultural Centers Foundation has been created to specifically benefit The Dubois Museum, the Pioneer Museum in Lander and the Riverton Museum.  The WRCCF will help deliver the long-term financial support our museums need to flourish.  In the current economic environment, the museums are more reliant than ever on donations from the private sector to continue to provide the quality programs, collections management, exhibits and services that have become their hallmark over the last four years.  Please make your tax-deductible contribution to be used specifically for the benefit of the museum of your choosing by sending a check to Wind River Cultural Centers Foundation at PO Box 1863 Lander, WY 82520 or taking it directly to the museum you choose to support.