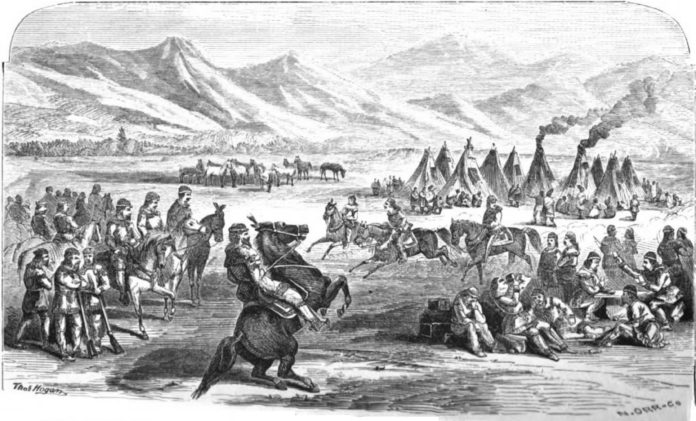 The fourth man discussed in this series is William Lewis Sublette. Sublette was born on September 21st, 1799, south of Stanford, Kentucky, in Lincoln County. His mother was Isabella Whitley Sublette and his father with Philip Allen Sublette. Eventually, the family migrated west to Missouri and settled in St. Charles. In St. Charles, the family opened another tavern, and Phillip was also appointed as Justice of the Peace for the town.

As an adult, William Sublette started his career in St. Charles by leasing timberland, which was used to cut down trees to make saleable rails. In 1820, William was appointed Deputy Constable of the town and was later appointed Constable. He was then re-elected as Constable in August of 1822. In 1820, William’s father, Phillip, died. Later in 1822, William’s mother, Isabella, also died. Sublette was left penniless. So, after his younger brothers and sisters were placed in the care of relatives and the administration of his parents’ estates were settled, William began looking for a new job.

In 1823, William Henry Ashley began advertising looking for trappers to travel west. After seeing the advertisements, William Sublette resigned his post as Constable, sold his possessions, and joined the group on the expedition up the Missouri River. In June, the group was attacked by the Arikara in South Dakota. Sublette saved his life by swimming from the beach to the boats while being attacked by arrows. In retaliation for the attack conducted by the United States Army, Sublette served temporarily, as Sergeant Major. After the battle, Sublette was a part of the party sent with Jedediah Smith to find a new territory for trapping beaver. The party spent the winter of 1823, near an encampment of Crow in the Wind River Valley. In February 1824, Jedediah Smith’s party set out over South Pass, but heavy snow forced them south of the Popo Agie. For the second time during this journey, Sublette almost lost his life in the blizzard before he was able to find shelter on the Sweetwater River.

For the next several years, William Sublette continued to trap in the mountains. In 1826, William H. Ashley sold his business to Jedediah Smith, David E. Jackson, and William Sublette. By written agreement on July 18th, Ashley’s supplies were transferred to the three partners and they promised to sell their fur directly to Ashley until their debt for the supplies was paid. Ashley also agreed to supply the three partners at the next rendezvous. The three partners split up and continued trapping. On New Year’s Day 1827, Sublette and Black Harris left their camp to return to St. Louis to get supplies for the upcoming Rendezvous from William H. Ashley. Once the supplies were obtained, Sublette leads the supply chain for the next Rendezvous west with his younger brother, Pickney Sublette.

Over the next couple of Rocky Mountain Rendezvous in 1828, 1829, and 1830, William Sublette took charge of the parties delivering furs to St. Louis and returning west with supplies to be sold at the Rendezvous. At the 1830 Rendezvous near Riverton, William Sublette and his partners sold their company to five mountaineers, including a previously discussed mountain man, Thomas Fitzpatrick.

From the 1830 Rendezvous, Sublette returned to St. Louis. In the Spring of 1831, he bought 779 acres of land west of St. Louis where a farm was established. After purchasing the land, he established a train of 23 supply wagons with his business partners and a few investors that would travel to Santa Fe. However, this business venture was disappointing, and Sublette returned to St. Louis in October where he got rooms at the City Hotel. In 1832, Sublette returned west with the supply train for the 1832 Rendezvous. On the return trip, he was shot in the arm after the party was attacked by Blackfeet.

Sublette returned to his farm near St. Louis with his old friend Robert Campbell. At the farm, he and Robert Campbell formed a partnership with a plan to build trading posts at several locations along the Upper Missouri River. Sublette took a keelboat up the Missouri River to the mouth of the Yellowstone to build a trading post named Fort William. The partners continued their business in the fur trade until ownership of Fort William was transferred to Thomas Fitzpatrick, Jim Bridger, and Milton Sublette.

In 1836, Robert Campbell and Sublette purchased a store in St. Louis to sell dry goods, but the pair continued to invest in the fur trade until 1840 when the last Rocky Mountain Rendezvous was held. In 1838, William Sublette fought for a seat in the Missouri State Senate against Whig candidate, John F. Darby, but lost the election. On January 15th, 1842, Campbell and Sublette dissolved their partnership. After dissolving their partnership, Sublette began to focus on his business on the farm west of St. Louis. In March of 1844, Sublette married Frances Hereford at his farm in a service conducted by Reverend William S. Potts. Later in 1844, the Democratic Party of Missouri selected Sublette to serve as an elector for the Seventh District. In July of 1845, Sublette and his wife traveled to Cape May in New Jersey for vacation. While on vacation, he became seriously ill with tuberculosis. On July 23rd, he died of his illness at the Exchange Hotel in Pittsburgh. His remains were returned to St. Louis for burial on his farm on August 8th. Several years later, his remains were moved and reinterred beneath a granite shaft in the Bellefontaine Cemetery in St. Louis.

(Photo Credit: “The Summer Rendezvous” from “Eleven Years in the Rocky Mountains and Life on the Frontier” by Frances Fuller Victor) (Artist Unknown)

May 22, 2 pm at the Riverton Museum, “Historic Riverton Walking Tour”

May 27, 7 pm at the Dubois Museum, “Buckskins & Ballgowns: History of Fashion and Dress Out West”