#Lookback: The Iron Lung and Polio 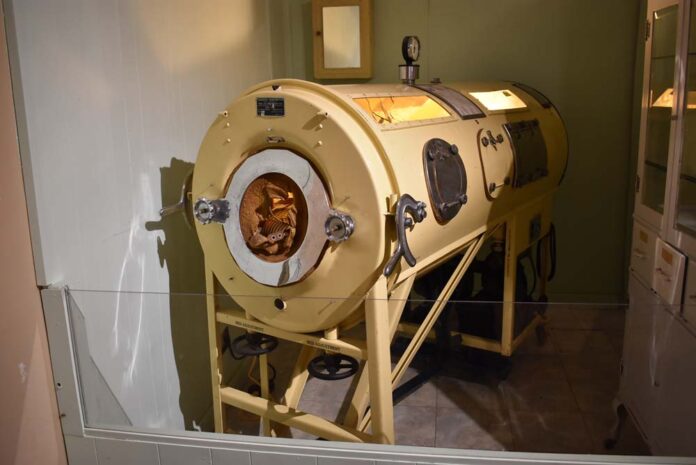 Imagine being a 6 year old child riding your bike on a summer day, playing with your dog, and fighting with your siblings, and one day you develop a fever, sore throat, a stiff neck and perhaps some nausea and soon some of your muscles become very weak.  These were the symptoms of poliomyelitis or polio.

In the first half of the twentieth century this was a disease that terrified most parents.  If the paralysis affected the diaphragm, the muscles that control breathing, a child would die without intervention.

There were several outbreaks of polio in the first half of the 20th century, but an especially bad outbreak occurred in the 1950s.Theaters and swimming pools were closed and parents kept their children home trying to avoid an infection of polio that could permanently disable a child.  In big cities, there were polio wards full of iron lungs, a device used to assist breathing, filled with children whose breathing had been compromised.

In the first half of the twentieth century, polio was a summertime scourge ebbing and rising through the years.  Why did it become a problem so suddenly?  Ironically, because of better sanitation.  Mothers who had had polio before they became pregnant and recovered passed on their immunity to their unborn children, so children had the ability to fight off an infection and develop their own immunity.  Polio is passed on through poor sanitation and fecal matter, but with better sanitation fewer women encountered the virus and so could not pass on their own immunity to their children. This made children more vulnerable to infections.

The iron lung was invented by Philip Drinker and Louis Agassiz Shaw who were engineers at Harvard School of Public Health in 1928.  The iron lung consisted of a coffin-like box with bellows that controlled the air pressure inside the box.  It made a whooshing sound with every breath. When air was sucked out of the box a vacuum was created and the lungs took in air; when the vacuum was released the lungs deflated and exhaled.  A patient’s body was placed in the iron lung with his head outside the box. This method of artificial respiration was called External Negative Pressure Ventilation (EPVN)

Most patients only had to spend a few weeks or months in an iron lung before they could learn to breathe again on their own with the help of physical therapy, but if the diaphragm was permanently paralyzed the iron lung was necessary for the rest of their lives. Some patients lived for 60 or 70 years with an iron lung breathing for them.

Polio usually infected children, but Franklin Roosevelt, the president during the Great Depression, contracted polio at age 39. He lost the use of his legs as a result and had to use braces on his legs to stand.  As a result of his personal struggle, the March of Dimes was organized.  An effective polio vaccine was developed in the 1950s by Jonas Salk and a nationwide campaign funded by the March of Dimes to inoculate school children was begun.  Celebrities such as Grace Kelly, Elvis Presley, Louis Armstrong and Frank Sinatra encouraged their fans to get the vaccine.  Salk’s vaccine was 90% effective against Type II and Type III polio viruses and 60 to 70% effective against Type I. An inactivated dead virus was used to make Salk’s vaccine and was administered by injection, but boosters were required to maintain immunity.

Soon, Albert Sabin developed a more effective vaccine using a live but weakened virus which offered lifelong immunity. It was administered orally in two doses. Many people of a certain age, remember being given sugar cubes stained with Sabin’s vaccine.

Thanks to widespread vaccinations, polio is almost unknown in America today and has almost been eradicated from the world, but unvaccinated people could give polio an opportunity to plague us once again.

On display in the Pioneer Museum In Lander is a big yellow iron lung.  It originally came from Warren Air Force base before being transferred to Bishop Randall Hospital in Lander to help save lives. A collar around the patient’s helped to maintain an airtight seal.  At the foot end of the machine a manual bellow to allow ventilation to continue in case of a power failure. Windows and access ports allowed nurses to care for the patient while maintaining air pressure and ensuring breathing.

The iron lung is a relic of the past, which hopefully we will never need again.

December 2022-October 2023 at the Pioneer Museum, “Wind River Memories: Artists of the Lander Valley and Beyond” art exhibition