#Lookback: The American Bison: The History of the Bison Hunt 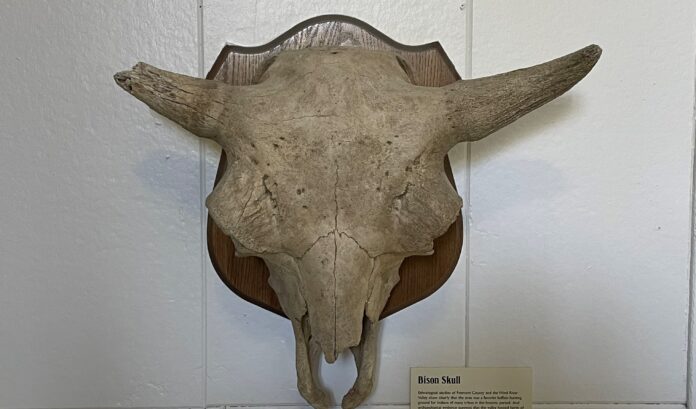 At the Riverton Museum there is a skull of the American Bison hung above the stairwell into the basement.The American Bison was designated as Wyoming’s state mammal in 1985.At one time, bison were one of the most abundant large mammals in the Great Plains.About 30 million bison roamed North America ranging from Mexico to Canada about 200 years ago.The sound made by the massive herds of bison was nicknamed the Thunder of the Plains.In 1804, Lewis and Clark reported seeing a herd of 20,000 bison at the mouth of the White River in South Dakota.Mapmaker Stephen H. Long reported seeing bison herds so dense that the plains appeared to be black instead of green on an expedition in 1820.

For thousands of years Native Americans depended on bison.They organized late summer and early fall hunts every year to get a winter supply of meat.The Native Americans living on the plains used every part of the animal.Hides were tanned to make clothing, shelter, and bedding.Bones were used to make tools for making flintstone into arrows or spears.The hair was braided to make rope.The stomach and bladder were dried and used to hold water.These are only a few examples of how the bison was used in Native American culture.Native Americans hunted bison for thousands of years, but did not diminish the size of the herds because they believed in hunting to meet their needs and not to acquire a surplus.

By the 1830s, bison hides made their way to the Eastern cities of the United States through trade between the Native Americans and the mountain men at trading posts established in the Western United States.At these trading posts, traders introduced trade goods such as beads, metal, cloth, and alcohol into the trade for bison hides.The introduction of the trade goods increased the hunting of the bison.During the 1870s and the 1880s, about 25% of the hides sold to manufacturers in the east were hunted by the Native Americans.

Hunting for sport increased in the Great Plains increased as white settlers moved west.Sport hunters sometimes took a shot at a bull bison for trophy and brought it home, but some killed bison without restraint.John James Audubon, a great naturalist famous for his detailed illustrations of birds from his book titledThe Birds of America, traveled to the northern Great Plains in 1843 and observed remains of bison that were killed for nothing.The completion of the Transcontinental Railroad in 1869, brought hunters on excursions to the Great Plains.Hunters often shot bison from the train cars.Hides, horns, and heads of the bison were shipped east on the railroad to make bison horn furniture and hide coats, which were popular items in the homes of wealthy people.

Before 1870, it was not practical to tan bison hides using the same process used to tan cow hides.A new process was developed after the Civil War to tan bison hides for making belts to drive machinery.Commercial hunters killed thousands of bison to provide the materials needed to make these belts.The development of the Sharps .50-caliber rifle in 1874, also made it easier for commercial hunters to kill a bison without getting too close to a dangerous animal.

Between 1881 and 1883, Naturalist William Hornaday estimated that about 300,000 bison hides were shipped from the plains to the tanneries in the east.By 1884, hunting bison declined because of a drought and the increasing numbers of domestic cattle in the plains that were destroying the grasses.Domestic cattle also transferred diseases such as tick fever and bovine tuberculosis further reduced the remaining herds of bison.Although the number of hides shipped east were greatly reduced, the bones that scattered the plains also had industrial uses.Pioneers would pick up bones and sell them at railroad depots where they were shipped to factories in St. Louis and Detroit.In the factories, they were ground up to make glue or fertilizer.Bones were also used to make charcoal that was used to filter and purify sugar syrup.By the late 1890s, the market for bison bones had ended.

By 1885, the bison faced extinction.William Hornaday began counting the bison in 1889.He discovered that 285 bison lived on federal land, mostly in eastern Montana.On non-federal land 256 animals were counted, but they were part of private herds preserved by ranchers in Montana, South Dakota, Oklahoma, and Texas.In Canada, he counted 550 animals.This led William Hornaday to organize an effort to conserve the bison in the United States.

Photography on exhibit in the Western Gallery though December

The Dubois Museum, the Pioneer Museum in Lander and the Riverton Museum need your financial support.In the current economic environment, the museums are more reliant than ever on donations from the private sector to continue to provide the quality programs, collections management, exhibits and services that have become their hallmark over the last four years.Please make your tax deductible contribution to be used specifically for the benefit of the museum of your choosing by sending a check to Fremont County Museums 450 N 2ndRm 320 or taking it directly to the museum you choose to support.