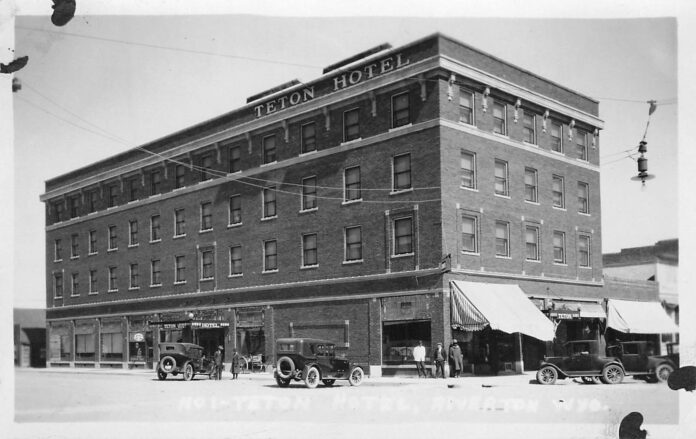 During the early years, visitors to Riverton would stay at smaller hotels like the Wind River Hotel or the Lapeyre Hotel.  The local businessmen of Riverton believed that the town needed a larger and nicer hotel for visitors to stay at during their visit in town.  One of those businessmen was Jacob A. Delfelder.

J.A. Delfelder moved to Riverton in 1912, from Evanston and quickly became one of the leading businessmen in the town.  In 1913, he moved into one of the biggest of the early homes constructed, located at 222 South Broadway Avenue, from Mrs. Blake, the widow of local rancher and banker Jay Blake.  Shortly after his arrival in Riverton, J.A. Delfelder was elected as the Mayor of Riverton.   He served as Mayor of Riverton until he declined to run in 1917.  However, he was re-elected in 1918, after the residents of Riverton convinced him to run for mayor again.

Also in 1918, J.A. Delfelder gathered a group of investors to propose the construction of a larger, nicer hotel in Riverton.  An agreement was made with the investors and construction began on the Teton Hotel.   The Teton Hotel was a four-story hotel containing seventy-five rooms, a nice lobby, a restaurant, a lounge, and a coffee shop.

The construction of the hotel was completed in 1919, and I.B. Allen was hired by the Board of Directors to manage the Teton Hotel.  A newspaper article announced the opening of a few completed rooms on June 20th, 1919, as follows:

Tonight it will be possible for the first time for a guest to get a nice clean bed in a handsome comfortable room with bath in connection at the new Teton Hotel in Riverton.  Within a few weeks, the dining room also will be open to the public and Riverton will then have a home to welcome the traveling public that no other city in the entire west can surpass.  The Teton will always stand as a monument to the enterprise and optimism of the leading businessmen of Riverton, who organized locally and undertook the construction and furnishing of this handsome building.

The first night, June 20th, 1919, the Teton only had six rooms available for guests and it was recorded that seven people occupied these rooms.  As rooms were furnished, they were made available for guests.   On June 25th, 1919, it was recorded that 34 guests were occupying the rooms at the Teton Hotel.   All seventy-five rooms were available for occupation by the first week of July 1919.  Also, by July 10th, 1919, the dining room was opened for the public to use.  Over the years, the hotel became a stopping point for travelers who were on their way to Yellowstone National Park.  For the locals, the restaurant, coffee shop, and lounge became a gathering place for get togethers.

In the 1960s, the Teton Hotel closed its doors when travelers began to stay in motels more often than in hotels.  In October of 1985, the Teton Sertoma Incorporated bought the Teton Hotel with plans to renovate the upper levels into apartments for senior citizens and the street level into commercial rentals.  In 1986, an open house was held to show the newly remodeled apartments and lobby in the former Teton Hotel.  The lobby was restored to its original state and the remodel included 27 apartments that were available for rent for people over the age of 55 years old.

August 31, 7pm at the Dubois Museum, “Music at the Museum: Packin the Mail”