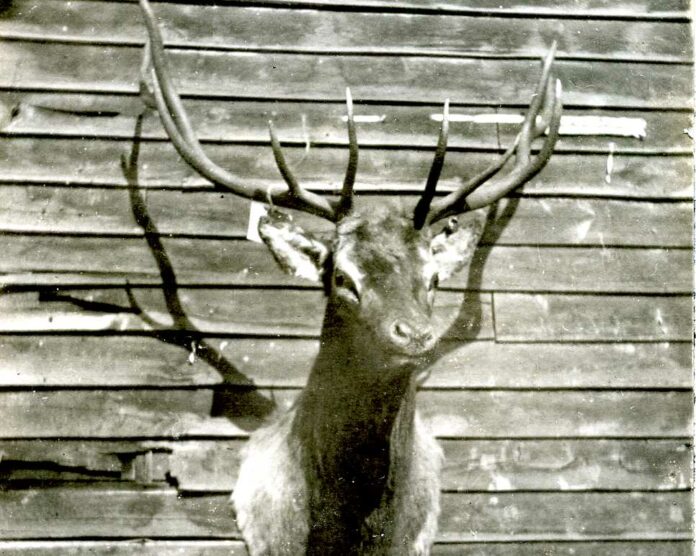 Taxidermy is the art of preserving an animal’s body by mounting it for the purpose of
display. One of Lander’s earliest taxidermists was Swine Rhodes, who came to Lander
in 1899 and opened his own Taxidermy shop in 1900. Originally his shop stood east of
the Popo Agie river next to the old Lander Brewery. Because of the abundant wildlife in
Wyoming and the hunters they brought to Wyoming, Lander was a good location for a
taxidermy shop. Rhodes had apprenticed under R.S. Rowson for ten years. Rowson
was a pioneer taxidermist in Colorado.

By 1904, Rhodes had partnered with O.R. Gilbert. Gilbert specialized in tanning the
hides. Their taxidermy business was known as Rhodes & Gilbert taxidermists.
In 1910, they ran an advertisement that read:

We are mounting Elk Heads 52 weeks in a year. We do our own work, then we
know it is done right. Our charges are no higher than you pay incompetent
workman. “Practice makes perfect,” we have the practice, and mount more Elk
Heads in a year than any other four Taxidermists in the state, or any other “old
state.”
Every specimen you get is worth bringing in. If you cannot use it, we can. Bring
everything from the hoofs to the horns. Have the hide tanned. It will be worth
money someday, in the near future, and will make a beautiful rug or robe.
See that your specimens are not rolled up green; dry them in the shade.
Whether cow, calf or bull, do not allow any part of it to go to waste. OUR MAN
AT DUBOIS will take care of them for you. See that you get them to him in good
shape, and we will do the rest.
When you take a Fur Skin, such as Coyote, Wolf, Bob Cat etc., always save the
skull, we give you in exchange for them, SILVER and GOLD.
We also want Elk Skulls, of all kinds, whether they have horns or not.
If you fail to get a good pair of horns, a “pickup” pair can be made to look just
like fresh ones, and you can always find a pair of good ones.

In taking off the scalp, be sure you cut good and long so that the shoulder
mount can be made. The brisket should all be left on the skin. The World’s
Greatest Taxiderdermists and Naturalists. Perfect Pose and Expression.
In the heart of the World’s Only Elk Country, Lander, Wyo., Hub of the
Sportsman’s Wheel.
Yours for future orders.

One of their famous patrons was George Eastman of the Eastman Kodak Company.
Eastman was an inventor, entrepreneur and photographer who founded the Kodak
Photography company. Rhodes and Gilbert also taxidermied the Elk Mounts used in
Elk lodges in Cheyenne and Boulder.
In 1912, the state game warden raided the Lander Taxidermy shops. Since 1909, it had
been unlawful to kill a moose in Wyoming. The state was trying to re-establish a viable
moose population in Wyoming. The game warden argued it was also illegal to possess
a moose mount. Rhodes contended the moose mounts had been shipped in from other
states. The game warden confiscated two moose mounts from Rhodes and Gilbert’s
shop, although there was no charge of trying to evade the game regulations.
In 1913, Rhodes and Gilbert had moved their store to Second and Main Street, and by
1914 Gilbert had opened his own Taxidermy establishment. By April 1913, Rhodes had
taken on a new partner, a man named Hollings.
In 1915, Rhodes mounted “Old Boy,” a ram believed to be the largest bighorn sheep
killed in Central Wyoming. “Old Boy” had been poached illegally, and the body was
confiscated. The bighorn ram ended up on display in the Capitol Building in Cheyenne.
Swine Rhodes died in 1950 at the age of 95. According to his obituary, he had been
born in County York, England in 1854. He had operated his taxidermy business for 30
years. With his wife, Mary Watts Rhodes, they had three children.
Next up for the Fremont County Museum

December 2022-October 2023 at the Pioneer Museum, “Wind River Memories: Artists
of the Lander Valley and Beyond” art exhibition
January 26, 6-8pm at the Dubois Museum, “Who Saw The Last Comet” Wyoming
Community Bank Discovery Speakers Series
January 28, 6-8pm at the Dubois Museum, “Astronomy of the Winter Sky” by Tom
Herret, Wyoming Community Bank Discovery Speakers Series
Call the Dubois Museum 1-307-455-2284, the Pioneer Museum 1-307-332-3339 or the
Riverton Museum 1-307-856-2665 for detail regarding their programs.
The Wind River Cultural Centers Foundation has been created to specifically benefit
The Dubois Museum, the Pioneer Museum in Lander and the Riverton Museum.  The
WRCCF will help deliver the long term financial support our museums need to flourish.
In the current economic environment, the museums are more reliant than ever on
donations from the private sector to continue to provide the quality programs, collections
management, exhibits and services that have become their hallmark over the last four
years.  Please make your tax deductible contribution to be used specifically for the
benefit of the museum of your choosing by sending a check to Wind River Cultural
Centers Foundation at PO Box 1863 Lander, WY 82520 or taking it directly to the
museum you choose to support.