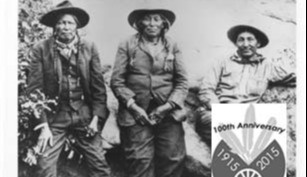 Sage was born in what is now Western Nebraska close to Pumpkin Creek in 1844 into a band of Arapaho led by Long Legs. Sage lived for 100 years. His life spanned a century of great change for the Arapaho. In later life, he was interviewed by historians, anthropologists, and a movie actor about his early life and customs of the nomadic Arapaho.

In his first year, Sage undoubtedly had a traditional naming ceremony, a first tooth ceremony and a walking ceremony. These were ceremonies where the elders recognized the new member of the tribe.

As a child, Sage witnessed the signing of the 1851 Fort Laramie treaty.This treaty established areas where different nomadic tribes could freely roam and hunt buffalo.It was the precursor of the reservation system.It allowed forts to be built in Native American territories and established an allotment system which made the tribes dependent on the US government for supplies.

At age 9, Sage killed his first deer, and at age 10 he briefly attended school in Denver City, but the behavior of the White children was unacceptable to his parents, and he was removed from school.

In 1858, gold was discovered in Colorado and White settlers flooded into the lands set aside for the Native American tribes. Soon after this, Sage killed his first buffalo at about age 16, but the buffalo were becoming scarce, and the Arapaho called 1863 the “year of hunger.”

Long Legs’ band stayed in the area of Estes Park and what is now Rocky Mountain National Park. This was an area that Sage knew well, he fondly remembered in the early days the valley of Estes Park was black with buffalo.

The Sand Creek Massacre happened in 1864 when peaceful bands of Cheyenne and Arapaho were slaughtered by Colorado militia men.Sage was not there, but news of the massacre spread rapidly across the plains and Arapaho starting moving out of Colorado. About three quarters of the Arapaho went to Oklahoma and the rest went North to Wyoming. Long Legs’ band moved North where there were still buffalo to hunt.

About age 21, Sage witnessed the Battle of Platte Bridge near Casper where Caspar Collins was killed.The city of Casper is named after Caspar Collins.At age 23, Sage fasted for 7 days and received the knowledge he lived by for the rest of his life.

In 1868, Sage married Beaver, a Southern Arapaho woman from Oklahoma. They had 4 children.

During the 1870s, Sage and other Arapaho leaders served as Scouts for the US army, and the Arapaho were placed on the Wind River Reservation on a temporary basis, but it became permanent.

Sage was always a curious man, and when The Ghost Dance religious movement started Sage was sent by Black Coal to Nevada to find out about it from the Northern Paiute spiritual leader, Wovoka. Black Coal, an Arapaho Chief, sent Sage and other delegates to Nevada in 1889 and again in 1890 to learn about this movement. The movement spread to the Cheyenne, Shoshone, and Sioux in 1890. Believers in the Ghost Dance thought if the dance was done properly the ancestors and the buffalo would return, the White men would disappear and the old way of life would be restored. The dance had tragic results at Pine Ridge on the Sioux reservation. Sitting Bull was killed by soldiers, and many Ghost Dance believers were massacred also. In 1924, Tim McCoy, the silent movie star, interviewed Sage about the Ghost Dance movement.

Sage served on the Chief Council from 1898 to 1902 and around the turn of the century, Indian Agent Nickerson gave “agency names” to the Arapaho, and Sage became known as Sherman Sage.

Sage worked as a reservation police officer for many years.

In 1914, the Colorado Mountain Club invited Sage to come to Estes Park to share his memories about his life in the area. The Mountain Club wanted to assign Arapaho names to places in the park. He visited a museum and stared at an exhibit of an Indian cooking pot for a long time, when he was asked why that exhibit held his interest, he explained the pot had belonged to his mother and it had a chip in the back. There was indeed a chip on the back.

In 1923, Sage applied for and was granted a military pension based on his service as an Indian scout. He shared his pension with his family members.

Sage was never a primary chief but his quiet, honest leadership was well respected in the tribe. He did much to preserve Arapaho traditions for younger generations.

June 23, 10am at the Dubois Museum,“Flint Knapping with Rock Cand”

June 24, 7pm at the Pioneer Museum,“Wyoming: A History of the American West” By Sam Lightner