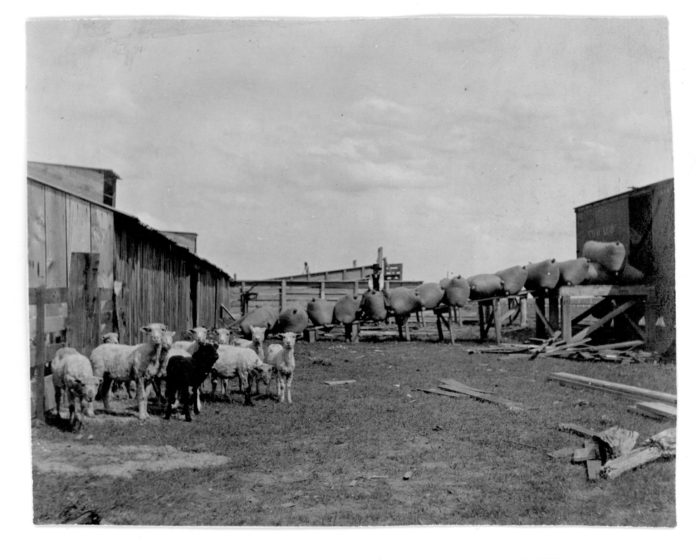 In most of Wyoming, cattlemen proceeded sheepmen by about a decade, and as a result, much of the prime water sources and grasslands were claimed for cattle. That was not the case in Fremont County. Sheep were first brought into the region in 1869 by William Tweed, which is when the first cattle herds were also brought in. Early sheep ranchers, like Eugene Amoretti, all settled near the Wind River Mountains, and as a result, as late as 1880 there were virtually no sheep to be found anywhere else in the county. When the drought and blizzards of 1886-87 struck the cattle ranches, sheep ranching became more widespread because sheep, which can survive on a wider variety of grasses and require little water, proved cheaper and easier to maintain than their bovine counterparts.

During the 1880s and 1890s, the distinctions between cattle ranchers and sheep ranchers began to blur as many cattle ranchers diversified their holdings and began raising both types of livestock. However, conflicts were inevitable as both industries rapidly grew, and the late 1890s-early 1900s saw the beginnings of the so-called “Cattle and Sheep Wars”.

Although short-lived, the Cattle and Sheep Wars occurred across the Western U.S. in Texas, Arizona, Colorado, and Wyoming. Armed conflicts stemmed from two main issues. The first issue was the belief that sheep ruined pastures and grassland by grazing grasses too short and thereby rendering it unfit for future use by cattle. Take, for example, this excerpt from Frank Benton’s verse “How I Love Sheep”

A sheep just oozes out a stink
That drives a cattleman to drink.
Its hooves leave flavors on the grass
That even make old cows pass.
Sheep ranges cattle sure won’t graze
But cowboys hate sheep anyways.

The second issue was the difference between the ‘cowboy’ and the ‘sheepherder’ in cultural imagery and popular imagination. Cowboys elicited images of strength, daring, bravery, and rugged masculinity. Sheepherders on the other hand were often characterized as weak, childish, soft, and gentle.

Range wars could turn violent, and cattlemen would engage in mass clubbings, poisonings, and dynamiting of flocks of sheep. Sometimes “rim-rocking” – or the practice of driving flocks of sheep over steep precipices – would occur, and some sheepherders themselves were even beaten to death.

Almost as quickly as it flared up, the violence began to subside after the establishment of the Forest Service in 1905. The newly established Forest Service strictly regulated grazing, especially in the mountains and foothills – the traditional summer ranges of most sheep ranchers. In 1934 the passage of the Taylor Grazing Act further regulated grazing and imposed fees for grazing on what would become Bureau of Land Management (BLM) land which helped curtail “tramp operators” who regularly moved their herds and/or flocks around public lands without regard for other ranchers.