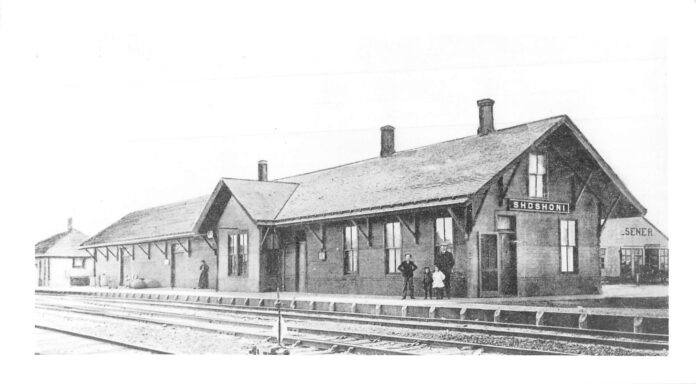 After its founding, Shoshoni quickly grew to a population of about 2,000 residents. At first, Shoshoni was a tent city, which meant that most local establishments were operated out of a tent, including the local Congregational church. Later, the church rented a log cabin for the paster to live for $8.00 a month and held church services in the cabin that housed the town hall and the town jail. In 1908, the Congregational church dedicated a permanent church building. This church now houses the Community Presbyterian Church in Shoshoni. The parsonage was finished a few years later in 1910. By 1906, the town of Shoshoni was incorporated. The first Postmaster of the town was C.H. King’s son-in-law, Robert H. Knittle.

The Shoshoni Gold Dredging Company was one of the failed mining endeavors at Copper Mountain. Barney Aronson moved from Casper, Wyoming, and established Barney Arnson’s Shoshoni Pioneer Location Agency. A locating agency was a real estate office that represented buyers in locating a property to buy. Arnson charged each buyer $25 dollars for locating property. After the discovery of gold and copper, Barney Arnson joined Asmus Boysen in his mining ventures in Copper Mountain. One venture was the dredging of gold from the Wind River near the townsite of Neble, Wyoming. This old town was located about 14 miles southwest of Shoshoni. Neble was formed by Nathaniel F. Shipton and acquired by Boysen. Boysen renamed the townsite from Wahaba to Neble after Colonel Solphus Frederik Neble, the publisher of The Danish Pioneer. As acting president, Barney Arnson registered as the agent of the Shoshoni Gold Dredging Company. The money for the operation was acquired from an investor named Frank A. Seiberling, the co-founder of Goodyear Tire and Rubber Company. At first, the company made six test drillings at the bottom of the Wind River. Based on the results of the test, the Shoshoni Gold Dredging Company purchased a dredger that cost approximately $49,000 and became known as the Neble Dredge. The dredger only got about twenty-eight cents worth of gold per cubic yard. After more extensive test drillings, it was discovered that dredging gold at this location was not a profitable business. As a result, the dredge only operated for about six weeks before it was closed. By 1920, Aronson moved to Thermopolis to operate an oil company.

The third project was the construction of an irrigation system and hydroelectric power from Boysen Dam built by Asmus Boysen. The current Boysen Dam was built in the 1940s and was named after the man who built the original dam in 1908. Asmus Boysen was born in Denmark in 1868, and he immigrated to the United States in 1886. In Illinois, he met and married Anna Leet. He and his wife moved to Audubon County in Iowa, in the early 1890s. For the next decade, Asmus made worked in banking and other capitalist ventures in Northwestern Iowa. He even served as a State Representative in the Iowa General Assembly from 1900-1903. However, Asmus moved west to Wyoming, to start a mining business known as the Asmus Boysen Mining Company. He invested in a dam that would provide power and irrigation for his mining business. The original structure was located downriver from the present Boysen Dam. It was made of concrete and generated about 710 kilowatts of electricity. The Burlington Railroad eventually built tracks over the dam through the Wind River Canyon. By 1925, the dam silted up and flash floods began to endanger the tracks of the Burlington Railroad. The company sued Asmus and demanded that the dam be removed. In 1948, the original dam was demolished.

Aug 7, 9 pm at the Dubois Museum, “Astronomy of the Summer Sky”