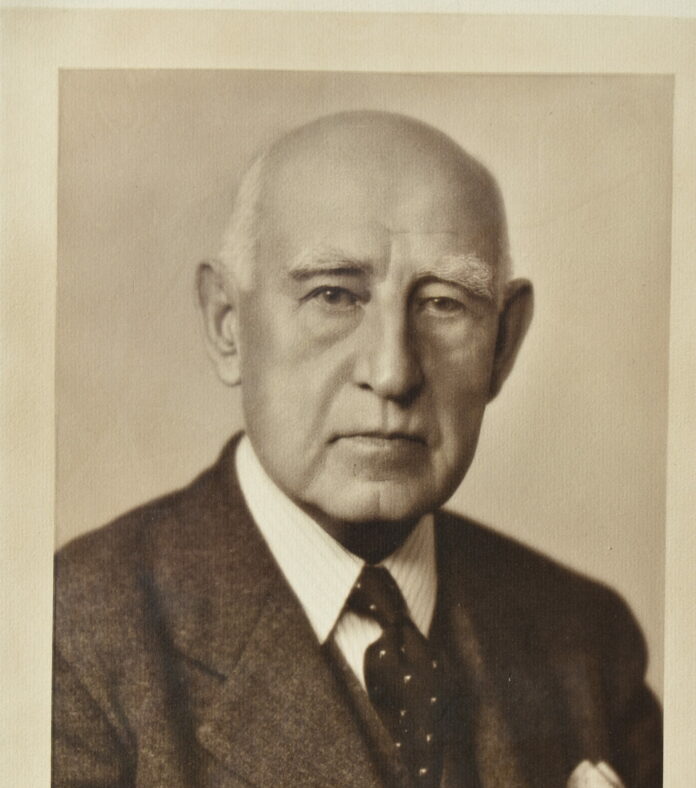 Three men with the same name made significant contributions to Lander’s history. Their lives were intertwined.  This essay will try to untangle their stories.

Judge S. Conant Parks was from Illinois and was a member of the Illinois bar. He and Abraham Lincoln knew each other as young lawyers and became good friends. Parks nominated Lincoln for the presidency at the Republican convention for the election of 1860. Abraham Lincoln appointed him Justice of the Supreme Court of Idaho Territory in 1862.

After some time in New Mexico eventually, Parks moved to Wyoming and was appointed as an Associate Justice of the Supreme Court of Territorial Wyoming. He was the first to hold a federal court hearing in Lander. He married Elizabeth in 1853, and they had one son, Samuel Conant Parks Jr. born in 1868.  In 1884, when Judge Parks found out Eugene Amoretti was looking to hire a teller for his new private bank, the judge sent his 16-year-old son over to the adobe house on the corner of Third and Main Street to apply for the job.  Young Samuel Parks Jr. was hired.  To set up his teller window, young Parks had to move rope and spools of barbed wire from the corner to make room, because the adobe house also served as a mercantile and a home for Amoretti’s family.

It is said deposits were placed in jars and buried in the basement for safekeeping.  Young Parks had no banking experience and set up his ledgers opposite from the standard bookkeeping style.  This was the start of his lifelong banking career.

Meanwhile, Parks Jr.’s cousin and nephew of Judge Parks arrived in Lander sometime after 1888. S. Conant Parks was about ten years older than his cousin and had earned a Ph.D from Halle-Wittenberg University in Germany in 1888; where he had studied international finance.

Dr. Parks originally came to Lander to clerk for his uncle, Judge Parks in his courtroom, but Dr. Parks soon became a partner with Eugene Amoretti, and together they founded the First National Bank of Lander.  A proper safe was purchased from Omaha for the new bank, and is now on display in the lobby of Key West Bank.

Dr. Parks built a mansion on Third Street prior to 1889. He lived there with another bachelor until he married Clara Hills in 1889 and moved his bride into the house.

Dr. Parks and Eugene Amoretti saw an opportunity in Cody to open a new bank.  The town of Cody was just getting organized and needed banking services.  In September of 1901, Amoretti and his second wife, Elizabeth made the three-day stage trip to Cody to do some of the preliminary work to open the bank.  They planned to make their home in Cody and build the town of Cody as Amoretti had built the town of Lander.  Unfortunately, Elizabeth died unexpectedly soon after they arrived in Cody. Elizabeth is buried in Cody. Amoretti was in his 80s and the loss of his wife caused him to change his plans about opening a new bank; however, Dr. Parks continued on with the plan to open the Shoshone National Bank in Cody.  Dr. Parks stayed in Cody until 1904, when Dr. Parks and Parks Jr. switched cities and jobs.   Dr. Parks moved his family back to Lander.  Parks Jr. moved to Cody and took over the Shoshone National Bank of Cody.

Dr. Parks returned to Lander and his fine house on Third Street.  His wife Clara became one of the belles of Lander society.  They had one son, Harold. Dr. Parks along with the Episcopal church was involved in building a proper hospital in Lander.  It was named Bishop Randall Hospital after the original Episcopal Bishop of Wyoming.  He was also involved in building the Carnegie Library in Lander on land donated by Eugene Amoretti.  His name is inscribed above the door of the old library along with the name of Amoretti and the notation in Latin that says, “They gave this site as a gift in 1907.”

Dr. Parks and Eugene Amoretti were also involved in establishing a bank in Thermopolis after Washakie and Sharp Nose ceded the land around the hot spring to the White men.