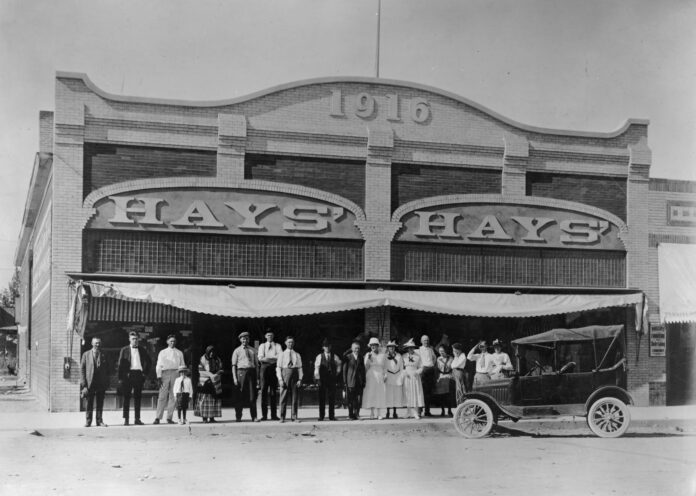 In 1905, with the McLaughlin Agreement between the United States Government and the native residents of the Wind River Reservation, 65% of the land on the Wind River Reservation was ceded for white settlers.  The land that was being opened for settlement was located between the Wind River and the Owl Creek Mountains.  After an agreement was reached, plans for opening the land were made for August 15th, 1906.  People gathered in Lander and Shoshoni to await the official opening of the town site land.  While they waited, many businessmen who were looking for new opportunities in the new town site began to gather supplies and prepared to stake a claim on the best lots in town.

In August of 1906, Roy E. Hays and his son David Hays arrived near Riverton to await their chance to stake a claim.  Roy sleuthed out where the main roads would likely be for the new town of Riverton.  Originally from Wichita, Kansas, the Hays had a history of sales dating back to the 1860s, having run stores in both Kansas and Colorado.  They were lured West by the promise of new lands and opportunities and arrived in the un-established area of Riverton one day before August 15th.  When the town site was officially opened, Roy E. Hays claimed two prime lots on the corner of what is now Broadway and Main Streets.

While the first Hays store was under construction, the father and son team operated out of a small log cabin located just down the street.  They soon moved into their newly constructed 25 by 44-foot storefront and set up shop.  The Hays store was the first wooden store built in the town.  Riverton quickly grew, and the Hays Store grew with it.  An addition was soon added and then a new brick storefront was built in 1916.  In 1932 and again in 1948, additional expansions occurred to add more space to the sales floor as well as additional warehouse storage.

The Hays Store was a store for everyone and was visited by farmers, ranchers, and townspeople.  In the early years, the store had so many Northern Arapaho customers that the store employed Northern Arapaho clerks to overcome the language barrier.  The versatile store carried products ranging from dry goods to horse tack and everything in between.  The store had a practice of always carrying top quality merchandise that met the needs of the townspeople, as well as the needs of those working in the agriculture, oil, sheep, and cattle industries.  Patrons could get their cosmetics, horseshoes, dress suits, hardware, and groceries all at the one-stop shop that was the Roy E. Hays Company Store.

Roy E. Hays was known as a kind and fair businessman and supporter of the community.  He funded commercial clubs and civic organizations and was a consistent contributor to efforts that supported road development and improvement into the town of Riverton.  Roy Hays was also known to have financially carried many local farmers and ranchers through the Great Depression.  Those in the agriculture business often ran a tab at the store and paid only twice a year.  Hays allowed them to continue to expand their credit through the difficult years, seeing many of them through what could have been financial collapse.  According to an article written in the Riverton Ranger in 1952, Hays saw 98% of those accounts paid in full.

Roy Hays remained active in the store for 54 years, until 1960 when his son David took over.  In 1962, Hays passed away at the age of 88.  Roy and his store saw the birth and growth of the town of Riverton, and he himself contributed greatly to the town and what it became today.  In 1968, after 62 years of operation by the Hays family, David Hays turned the keys over to the J.M. McDonald Company when they purchased the business.  J.M. McDonald Company understood and appreciated all that Hays had put into his store and vowed to continue the legacy that Roy E. Hays built.